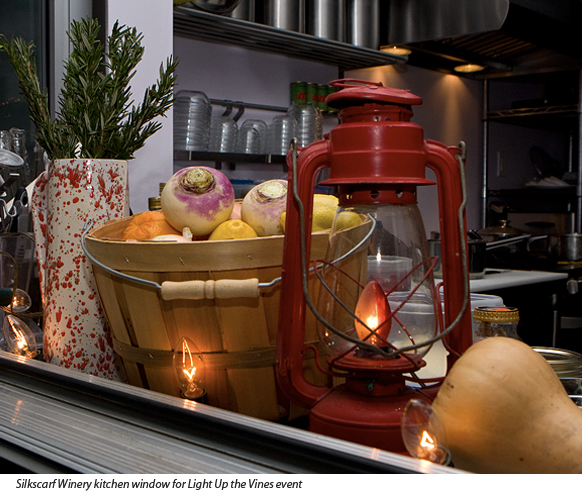 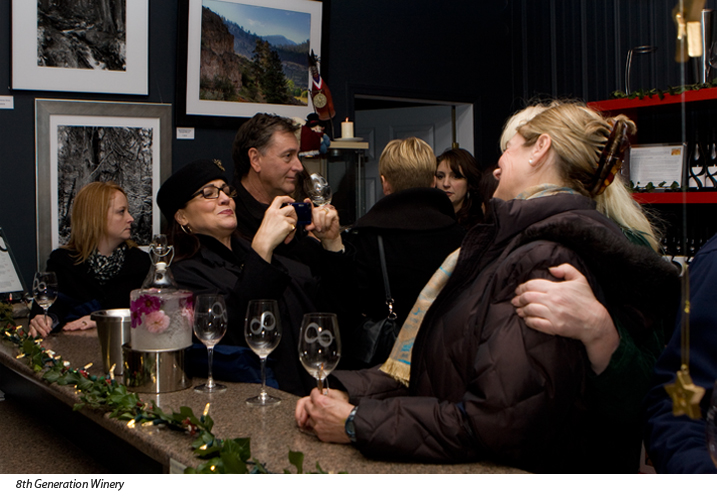 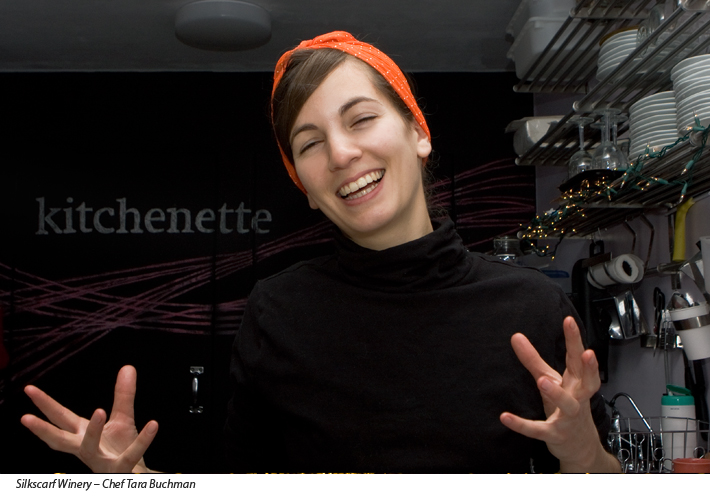 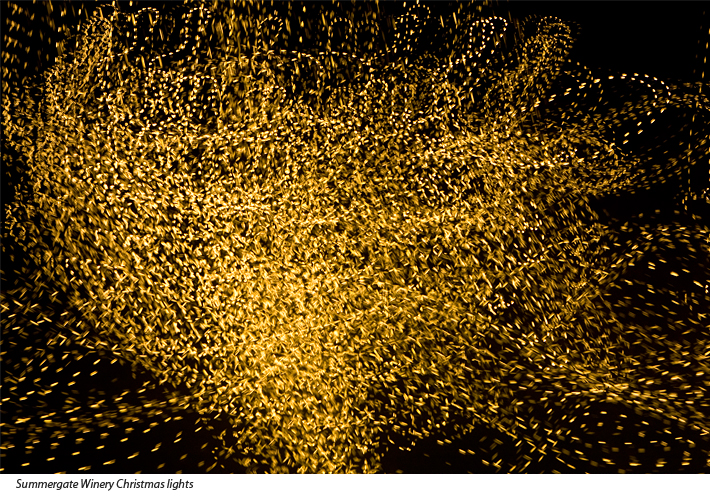 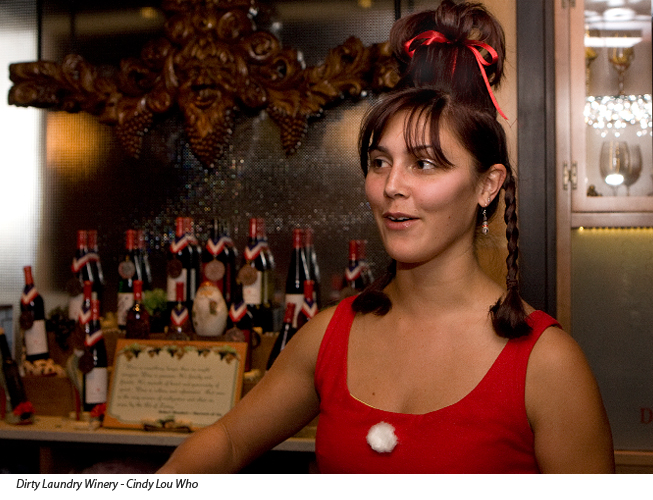 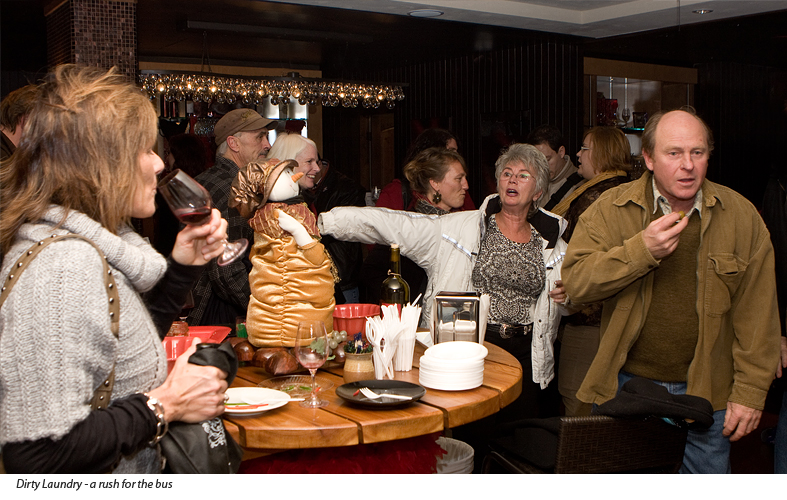 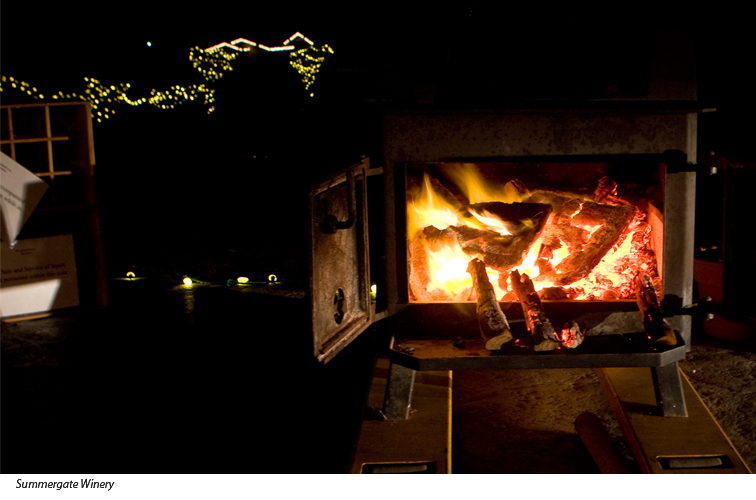 Summerland Lights up the Vines

The first annual Light up the Vines event in Summerland is now over but the good news is that there will be another one next year.

This past weekend, fourteen local wineries participated in the festivities by lighting up the vines and opening their doors to wine lovers from all over.

The brilliant idea for Light up the Vines, was Claire Sear’s; a writer for Eat Magazine. Claire approached the Summerland Chamber of Commerce back in the fall and asked if they would be interested in putting on the event. They said yes and as Lisa Jaager, Manager of the Chamber says, it will likely become Summerland’s signature event.

They hoped to sell 300 tickets and in the end it was sold-out at 370 – not bad for a first year event. The ticket price included the shuttles, the wine tour, appetizers and wine at various wineries.

“Extraordinarily fun”, “had the best time ever” and “we’ll be back next year” – has been the feedback on Facebook, Twitter and from people who have been talking to Lisa Jaager about the event.

The negatives? The shuttles. Not enough of them and not timed properly, but for a first year effort it was a stand-out achievement and according to Lisa Jaager, every shuttle licensed to be on the road, was at the event, so it looks like next year they’ll be bringing shuttles from the coast.

One gal from a group of Trout Creek Mums at Silkscarf Winery summed it up well:”Yeah the shuttles were a problem but it was just a reason to party more!”

“An event like that was overdue for Summerland. I like the fact that a lot of local visitors came by – some already knew our product but some just took the opportunity to “finally make it to our spot”. I think it’s the same story with other wineries. A lot of friends and couples also took advantage of the occasion to have a great night out. For example a group of 20+ people – all Trout Creek neighbors (it looked like they were good friends) walked over and started the evening at our winery.

I also had a few people who came for the whole weekend from Salmon Arm, Kelowna, and even Vancouver. They began with the ‘Light Up’ on Friday, then the Artisan Market & popup stores then winding down….  YES; there was a shortage of shuttles but to be honest I didn’t have any grumpy customers. Everyone seemed to have a good time and their feedback was that they will all do it again next year. With word of mouth the 2012 Light up the Vines should be a huge hit. Business wise: Just a few sales but this is not the reason why I participate in such an event.”

“It was a wonderful venue. Main thing is that this was a first year event and there is a learning curve. Obviously there is the interest considering how this one turned out, so next year will be great.

At our winery – it was a gong show and no one wanted to leave. Picnic baskets were knocked on the floor and there was food everywhere (can you say part-tay?) and the food table looked like a trough. It was a huge success! But next year we need to have it catered or at least a burger stand. The appies we had weren’t going to feed 100 people at one time and we actually had well over 100 in the tasting room later on. Mostly all of the wineries needed more staff and more food so next year we will make sure that is provided.

In terms of business, we did a few thousand dollars in sales and would have done more but it was hard for the guests to carry the wine. Suggestion for 2012; people should be able to check the wine with the shuttles and carry on having fun. Then the shuttle brings the wine back to the hotel or a central drop-off area.

Bottom line? I can’t say this enough: For everyone, all the wineries and for Summerland, it’s tons of exposure. The 370 people that went through here will come back in the summer. It’s the perfect showcase for what we have. It’s not about that particular day so much. Everyone had a great time and each of those people will tell ten friends.”

The Summerland Chamber of Commerce is currently developing other innovative ways of promoting the agricultural, food, wine, arts and cultural aspects of Summerland. Judging by their efforts for the Light up the Vines event, they are off to a good start.

They also have big plans for next year’s 25th anniversary of Summerland’s Light Up. Expect the new Light up the Vines event to be a major part of it, but book early… this is an event you don’t want to miss.

2 Responses to “Summerland Lights up the Vines”