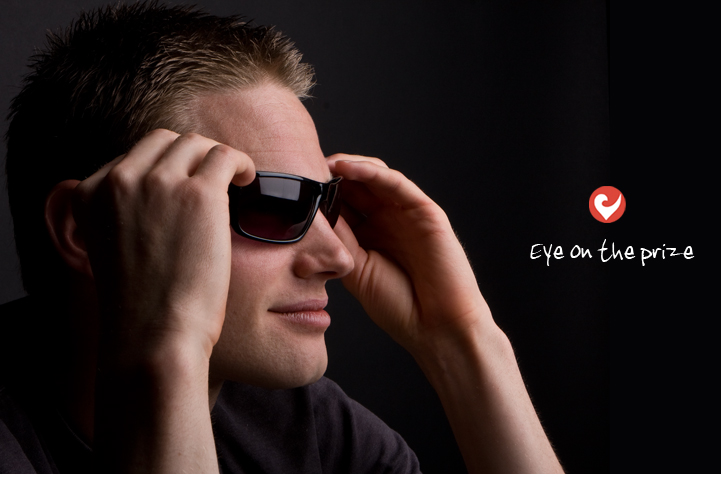 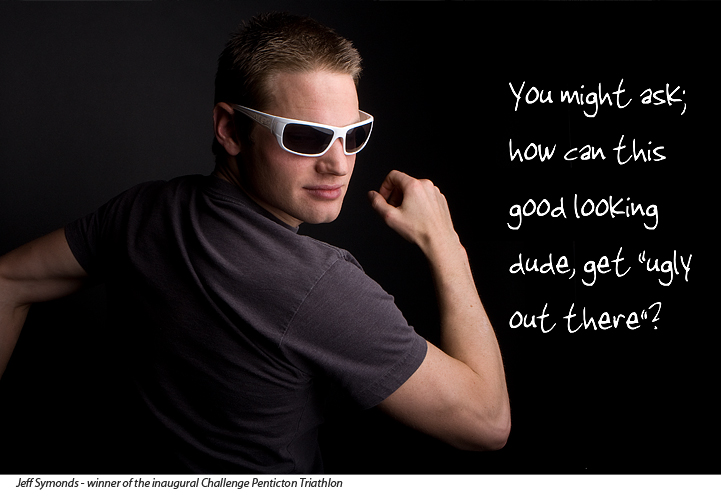 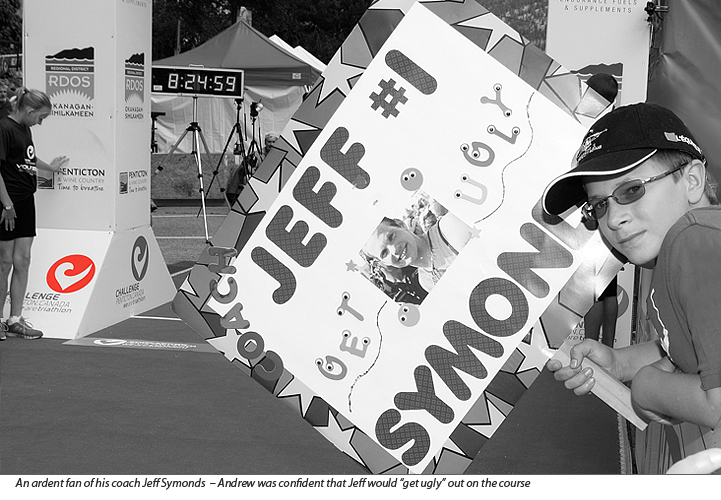 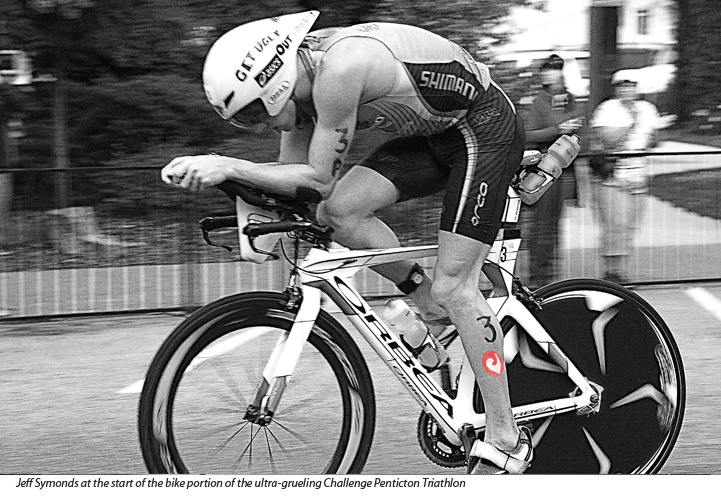 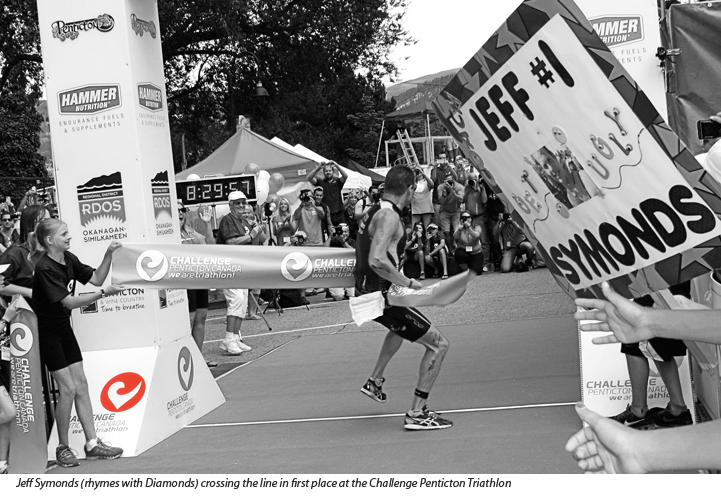 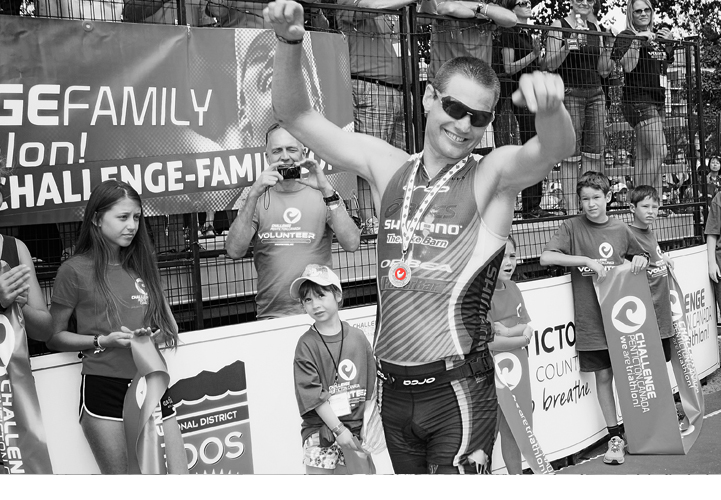 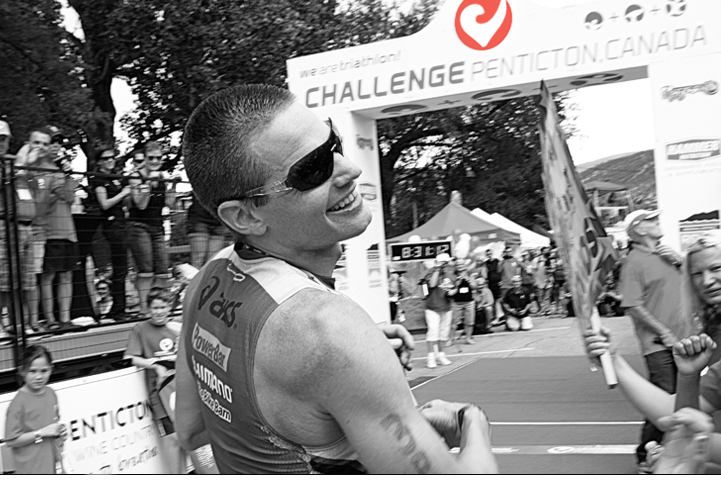 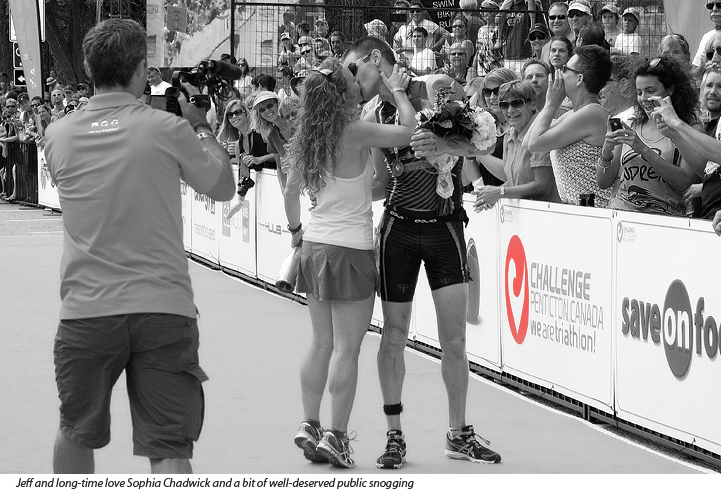 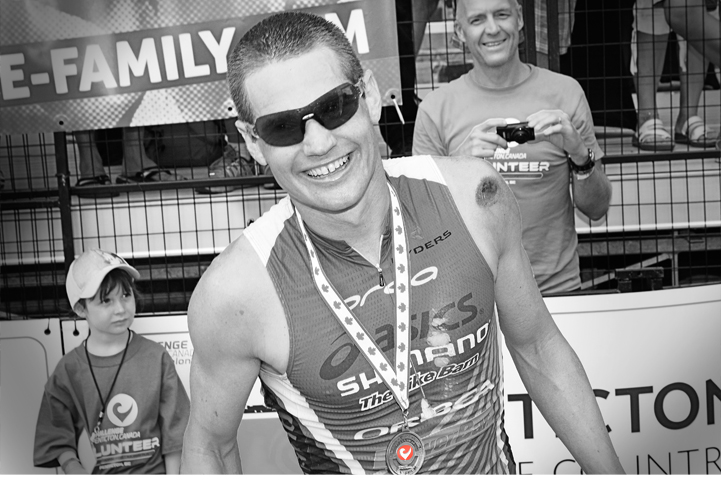 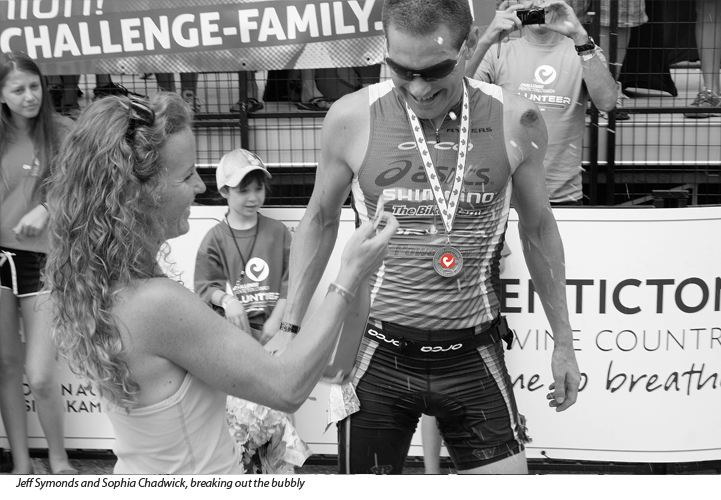 “Get ugly out there”

Jeff Symonds has a new title that no-one else can claim for their own; winner of the Challenge Penticton Triathlon.

On Sunday, sometime much later than his nearly 8.5 hour grueling race, Jeff Symonds, aka Jeff Diamond Symonds to his friends, took a much needed pain killer after being up for 23 hours straight and went to bed – as the newly crowned winner of the inaugural Challenge Penticton Triathlon.

According to Jeff’s Twitter page he loved every minute of the race. His Twitter profile reads “You know when you are at a race and you see THAT GUY who is in total agony, grinding, suffering, just getting ugly out there, yet hauling ass? I am THAT GUY.” How could that not be a winning attitude? Jeff Symonds is an affable and charming character, full of enthusiasm and it didn’t take much to get the crowd behind him at Sunday’s event. It is fitting that Penticton’s truly local triathlon was won by a truly local hero.

Symonds being interviewed post race, and sporting a number of nasty abrasions said; “It was unbelievable. I thought my dreams were going to come crashing down… I took a bit of a spill. Man – after that – I just got ugly out there and it’s amazing… anything’s possible – dream big.”

Shaking his head, later on, he said “I still can’t believe this day. I was descending this really steep hill and kind of tucked down and then when I stood up to shake my legs out to see how they felt I just lost control of the bike and skidded,” explains Symonds. “It just made it that much more painful and that much tougher, but that much more rewarding so I’m never going to forget this one.”

No stranger to the podium

In 2011 at the Ironman 70.3 World Championship in Las Vegas, Jeff had a third-place finish, which made him the first Canadian male and only the second man in his twenties to achieve a podium finish at the World Championships. (For Jeff’s event stats see Sportstats.)

In a Feb 7, 2012 article for Triathlete Magazine, writer Holly Bennett writes in a section of the article called Move over, Hugh Hefner that Jeff told Bennett that after the race, someone asked if being third in the world changed anything with the ladies. “There were literally guys handing me cards of girls who wanted to meet me.” One can see why, Jeff’s a good looking dude and apart from being a brilliant athlete, Symonds is also (unbeknownst to many), a very good model as well. Check out the photos of him modelling sunglasses in the gallery above – shot by yours truly a couple of years ago. Just an fyi to the ladies; Jeff and his gal pal Sophia Chadwick are tight as a drum (in case you were wondering).

Jeff coaches a number of young kids and several of them were cheering him on enthusiastically from the stands on Sunday. One particular student of Jeff’s and big fan, Andrew, had made a ‘Get Ugly Out There’ sign for Jeff. As Andrew’s coach – Jeff has been teaching him and his other students skills that go way beyond the physical ones – he gets into the mental strategies behind what it takes to be a winner in tough races like the Challenge Penticton. He gives them specific tips – for example, one he likes to call The Usain Bolt. He tells the kids to find something that works for them personally as a way to overcome nervousness and get feelings of confidence working for them. It works, and judging by the looks of awe on these kids faces, Jeff is obviously a favourite coach… and not too bossy.

“Penticton is modeling its long-term vision after the Challenge race in Roth, Germany”, according to an article in BC Business Magazine of May, 2013. “That city made the changeover from Ironman in 2001 and has now grown to 5,000 competitors and 150,000 spectators per year.”

With 1400 athletes having entered the Challenge Penticton inaugural triathlon, from as far away as New Zealand, Germany, Switzerland and Italy, it was a good start considering Ironman at last count in 2012 had a sold-out field of 2,500.

In the women’s category Carrie Lester from Australia was first with a time of 9:27:26 followed by Karen Thibodeau from Canmore, Alberta at 9:41:42 and Penticton’s Jen Annett finished third with a time of 9:58:23.

How do you top that?

The future for both Jeff and the Challenge Penticton Triathlon looks rosy. Considering that Jeff is still in his 20′s and traditionally triathlon winners are more seasoned, it looks like there will be a lot more big stuff from Jeff Symonds down the road. As Chris McCormack, two time Ironman World Champion, and two time ITU Triathlon World Champion tweets re Jeff Symonds: “That was a world class race on a f#@$ing hard course!” …”Awesome to witness, great guy”.

Chris McCormack was right – it was awesome to witness… and it felt a lot like history in the making.

Update re the future for Jeff Symonds and Sophia Chadwick: Jeff yesterday told Summerland Online that he is off to Vancouver to “Train to become a World Champion… Lots of opportunities in the big city to share my passion for triathlon and sport! Sophia is starting her masters in Physio Therapy at UBC. Which will be awesome for me when she is done!”