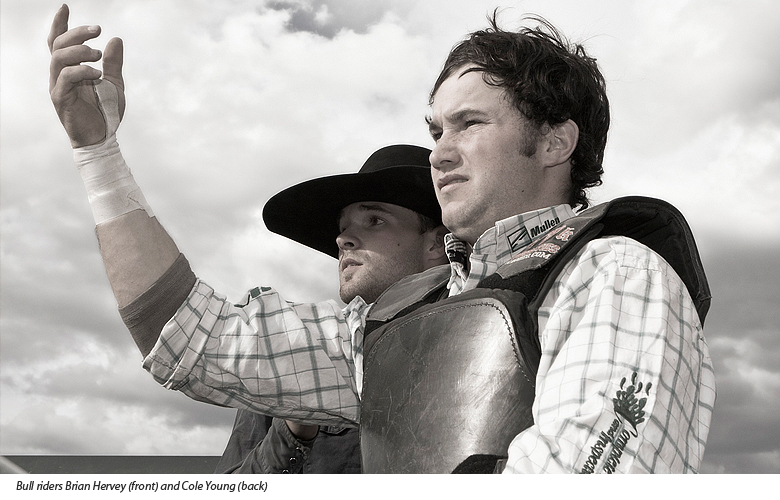 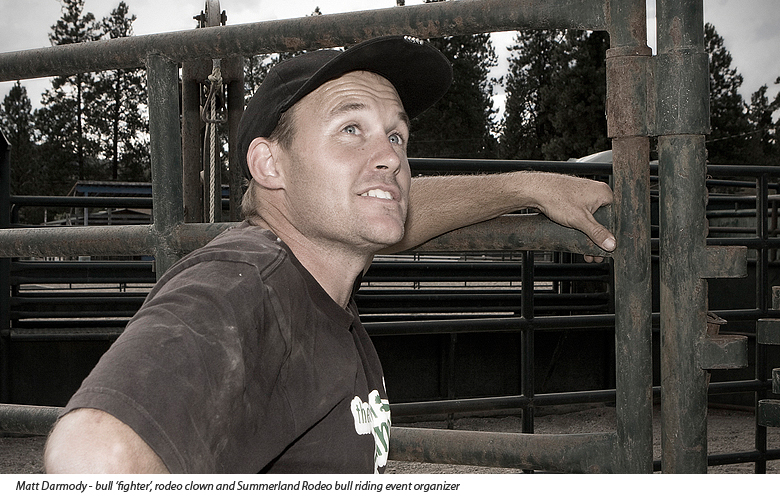 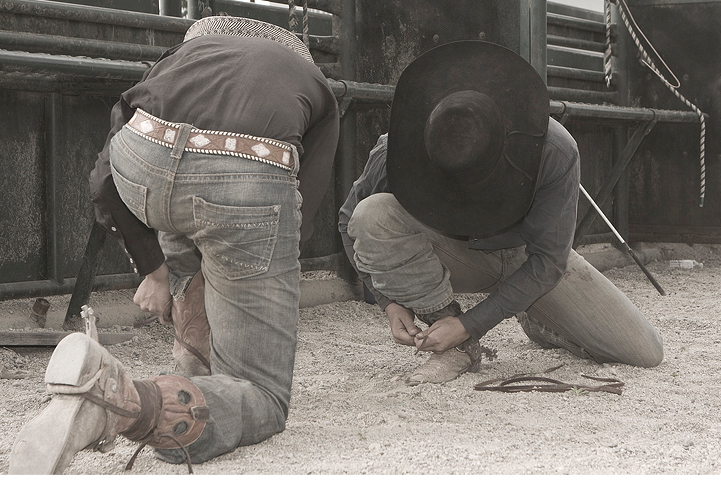 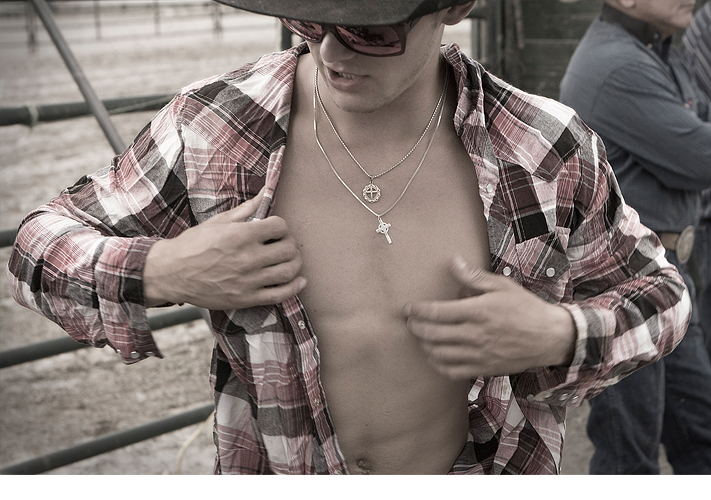 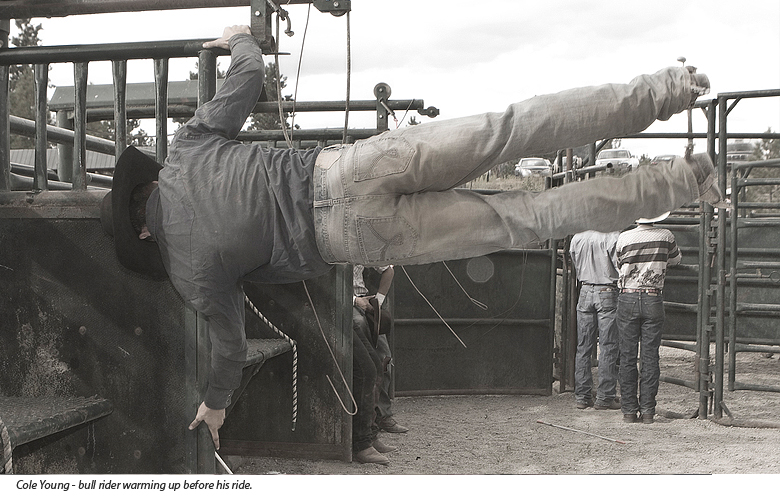 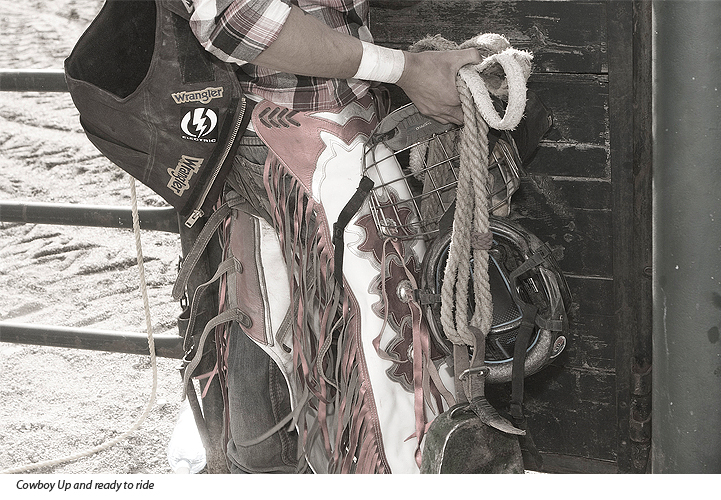 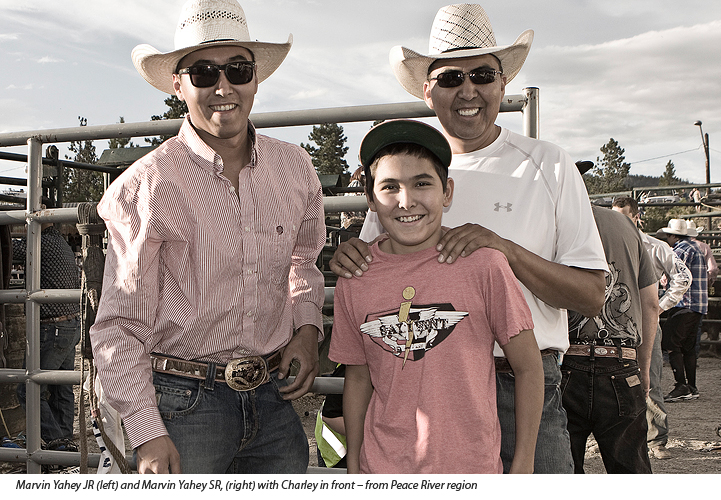 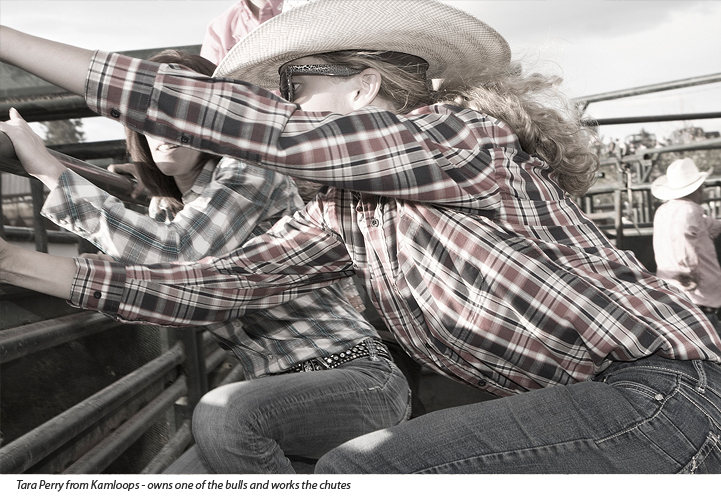 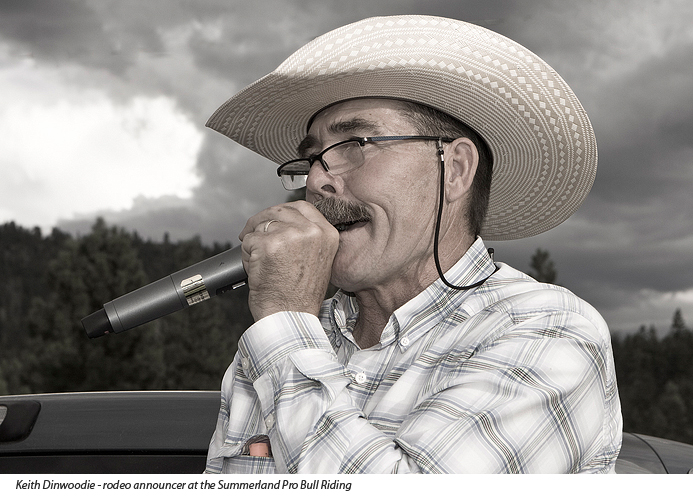 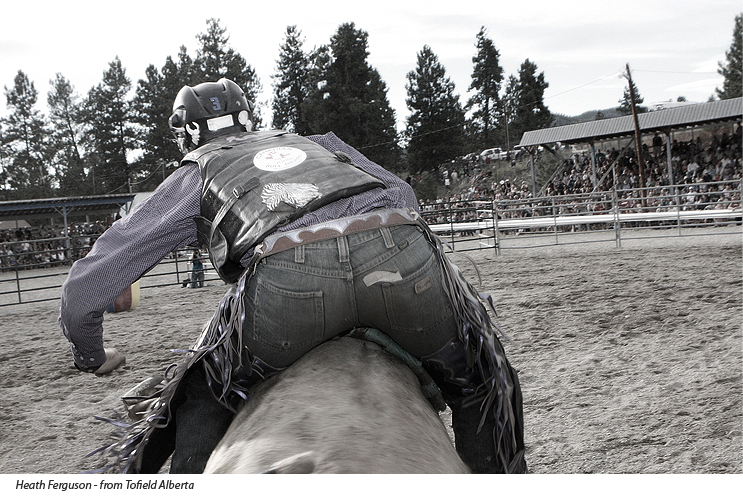 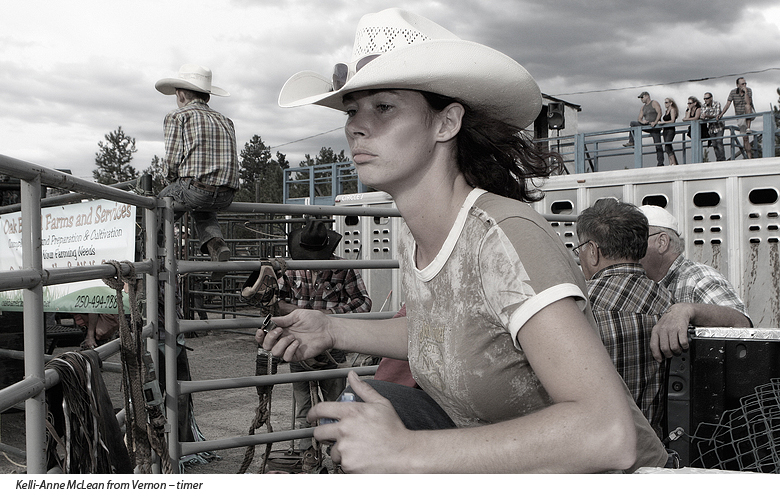 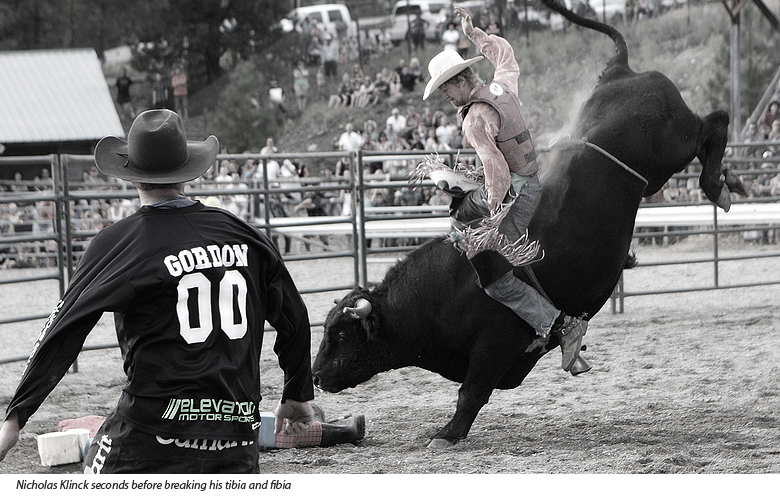 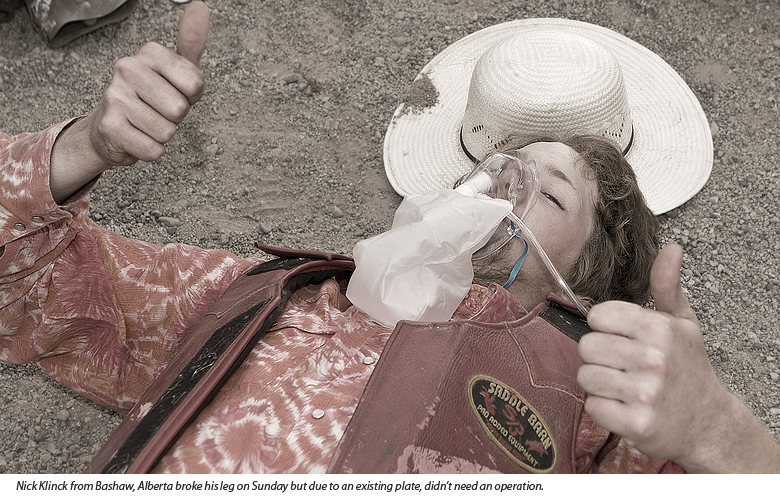 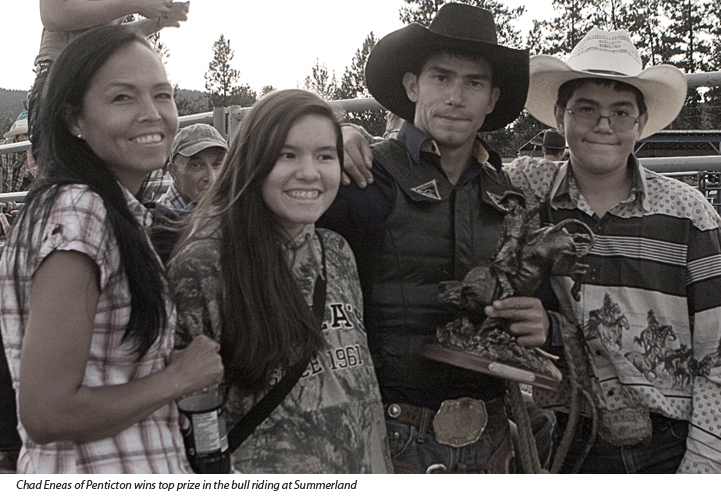 Bull rider Nick Klinck, excited about the upcoming Summerland Rodeo, writes on Facebook, “To start the weekend, had a cop buying us whiskey on the plane to Manitoba. I’d say we are in for a good weekend!”

His next post the day after the Summerland rodeo: “Having an awesome time at the Leffew ranch in California! Sure wish I didn’t have a broken leg.”

Nick had his leg crushed when he got hung up in his rope and the bull he was riding stepped on him. He was obviously in extreme pain and when asked if he was ok, he answered “I already got a plate in there, that’s why it hurts so much.” Ooh, yup – that would hurt.

Nick refused an ambulance, saying “no, I gotta go to California tomorrow”, but he later relented and off he went to the hospital in Penticton. As rumour has it, by midnight that same night, he’d already found his way to the OK Corral bar in Kelowna.

Seems that Nick Klinck is a bit accident prone. One of Nick’s friends comments’: “I’m going to wrap you in bubble wrap from now on”, while another says “Not again!” Nick broke the same leg, actually both legs, in a car accident on his way home from a rodeo finals in Alberta, two years ago. The good news is that the rod that’s already in his leg, is holding it together so he doesn’t need surgery. The bad news was that the day after the Summerland Rodeo, he was meant to fly to California to the Gary Leffew bull riding school, to improve his riding skills. Nick, evidently an optimist, says he “medicaled out of the rodeos he was entered in but decided to go to California anyway for a week of rest.” Nick adds that at the Summerland Rodeo, he came in 7th. LOL.

Nick’s got a Facebook friend, who lists under education – Dirt Road Scholar. Seems that is a common thread with bull riders – most of them having gone through the school of hard knocks. This is clearly no easy life – but to an outsider, there is a definite romantic side as well. Visually and from a sensory perspective, it’s a fascinating sport. The colorful chaps with their long fringes flying in the wind, the sinewy bodies of both bull and rider and the violent sounds of the bulls thundering through the back gates with spit flying in all directions – it’s hard core.

Bull riding as a sport is considered to be the most dangerous in the world. Maybe that’s why the audience likes it. A bit like watching the Christians and the lions – the risks equal added adrenaline. As a safety to the bull riders, ‘bull fighters’ are used to detract the roughly 1800lb. animals from the rider, once they have either been dumped or have jumped off after an 8 seconds ride.

There’s a toughness about these bull riders but there’s also a vulnerability. You can see it in their faces when they fall short on the clock and are beaten by 1 or 2 seconds. It’s heartbreaking but there’s only one winner.

According to the Bull Riders Canada site, there was a $1000 bonus for riding Bounty Bull. You kind of figure he has to be a mean SOB. Entry fees were $115 and the winner would take $2500. Considering travel costs and other expenses it’s slim pickins for all but a select few so bonuses help, but the part that possibly holds the most allure is the lifestyle. There is a strong sense of belonging with this pack of cowboys. They’re all there for each other, it’s an elite club where the criteria for membership is something that both cowboys and bulls possess in abundance; you’ve got to have kahunas for this sport. And a high pain tolerance. And you gotta like long distance driving.

Marvin Yahey Sr from Fort St. John, a former bull rider, drove 13 hours straight with his son Marvin Jr and the youngest, Charlie, so that Marvin Jr could compete. Charlie’s got a vicious scar below his left cheek – his Dad says “he cut himself shaving”, although clearly Charley is too young yet for that. In actual fact, he had a close shave with a steer so looks like the writing’s on the wall concerning Charley’s future as well.

Tara Perry, the pretty blonde gal working the chutes, owns her own bull – she’s had him since he was born in 2004. Tara comes from Kamloops and spends a lot of time at rodeos – besides working for a Kamloops stock contractor, she’s also into team roping. She spends a lot of time on the road going from one rodeo to the next

Justin Davis and his wife Sheshawna drove from Barriere to the Summerland Rodeo with their two young boys. Sheshawna recounts spectating at one of Justin’s rodeos on one of their first dates, thinking – “this is way too wild and crazy a lifestyle for me.” Ten years and two sons later, she figures there are two more bull fighters that she can add to the worry list. In the immortal words of Waylon Jennings: “Mama – don’t let your babies grow up to be cowboys…

The man responsible for Summerland’s local rodeo promotion was Matt Darmody, a ‘bull fighter’ and a bit of a wild one from New South Wales, Australia. He was working in conjunction with Bull Riders Canada Inc. and had made the eye catching signs used to promote the rodeo. Their effectiveness was proven with a sold out event.

Matt, kind of a humble guy, was born to be a bull fighter. His dad was a rodeo champion and before Matt could walk, he was living the rodeo life. Matt now works mostly promoting and bull fighting.

There was an after-party on Saturday night at the OK Corral in Kelowna. Matt hasn’t been seen nor heard from since. Probably feeling no pain. Good one Matt. Great event.