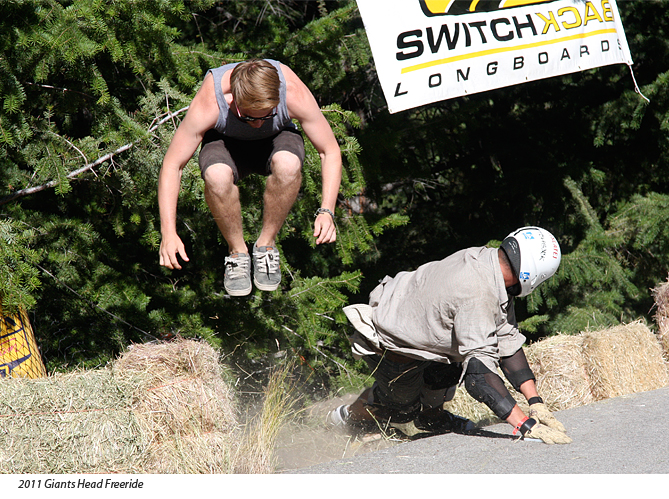 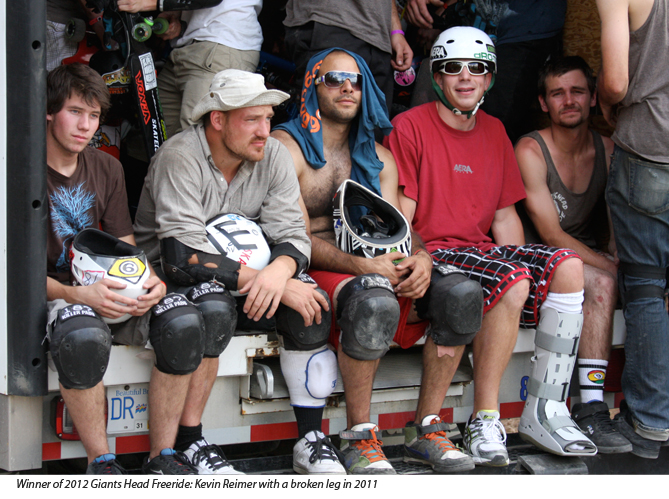 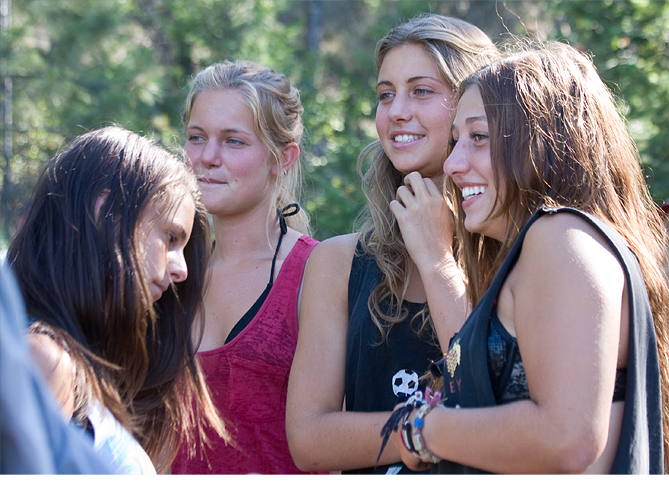 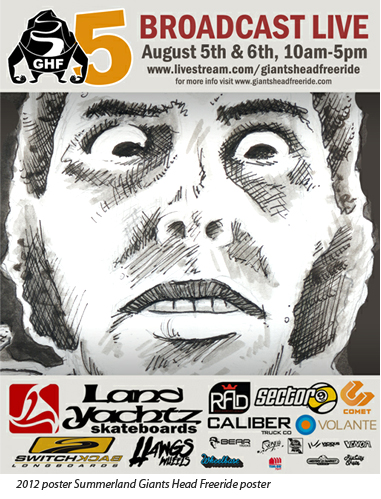 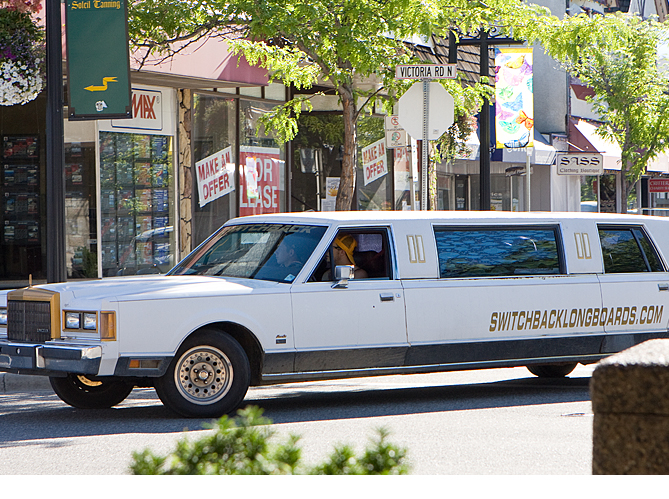 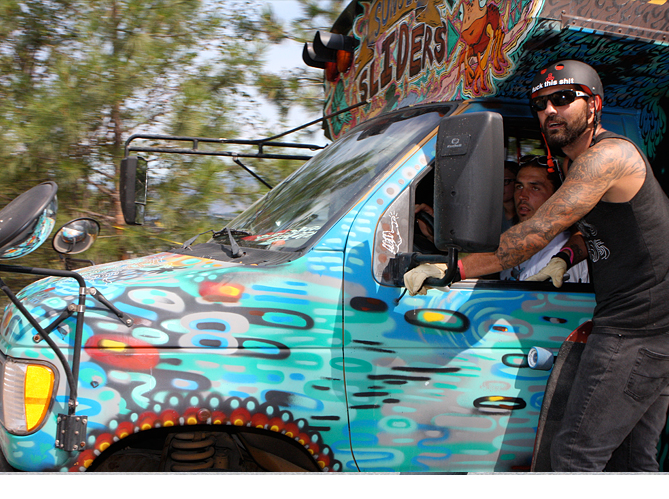 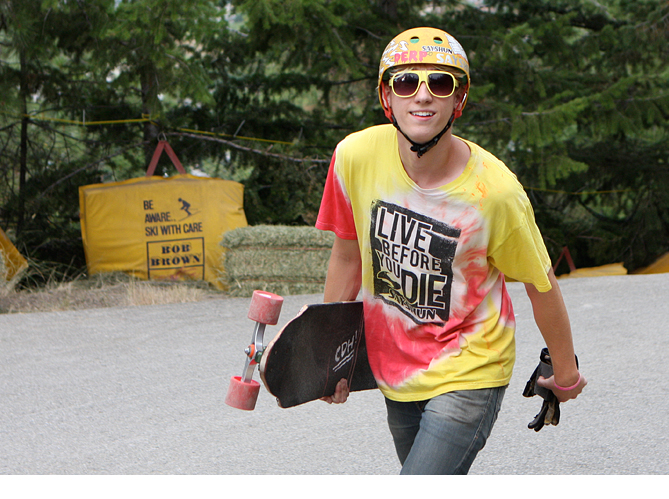 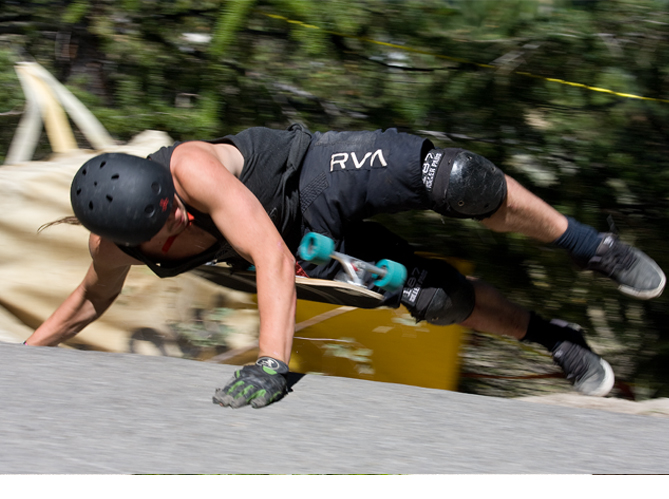 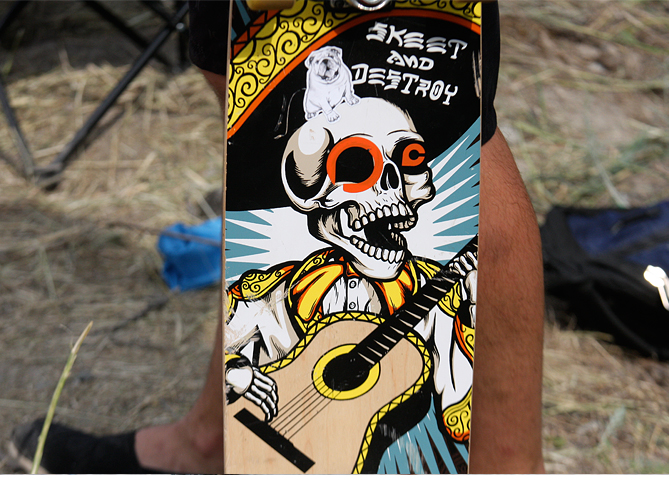 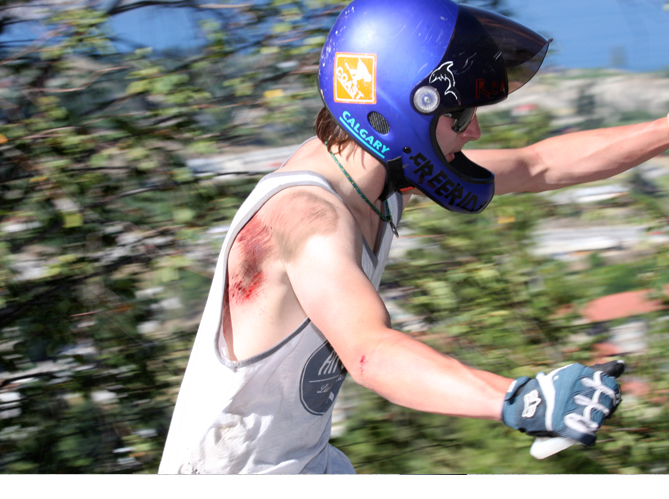 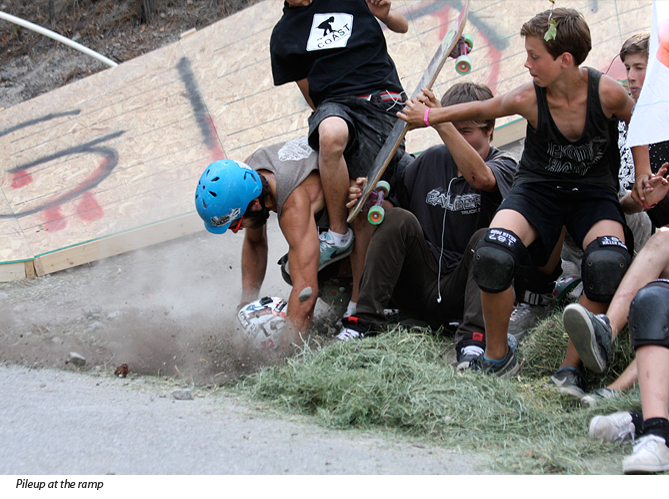 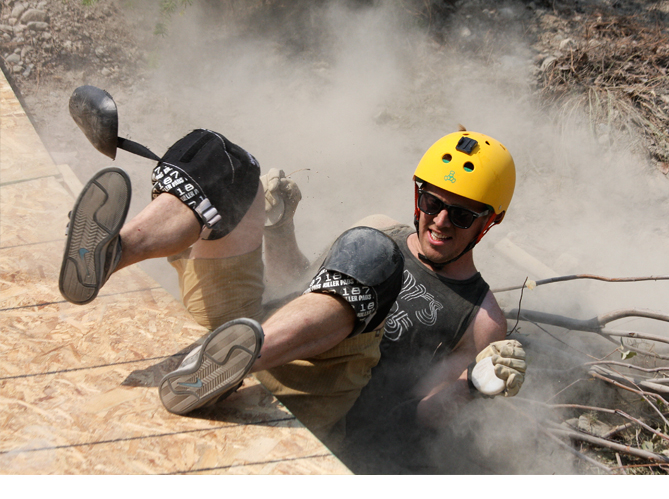 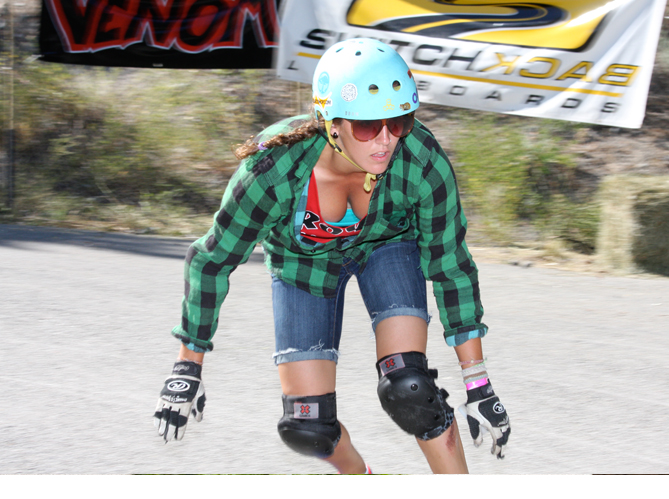 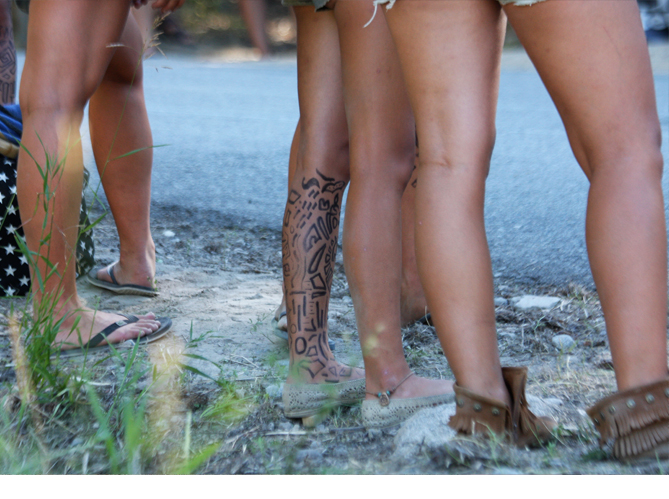 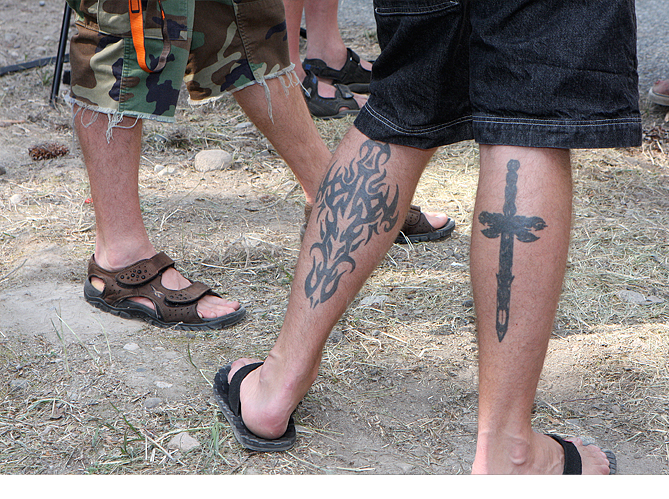 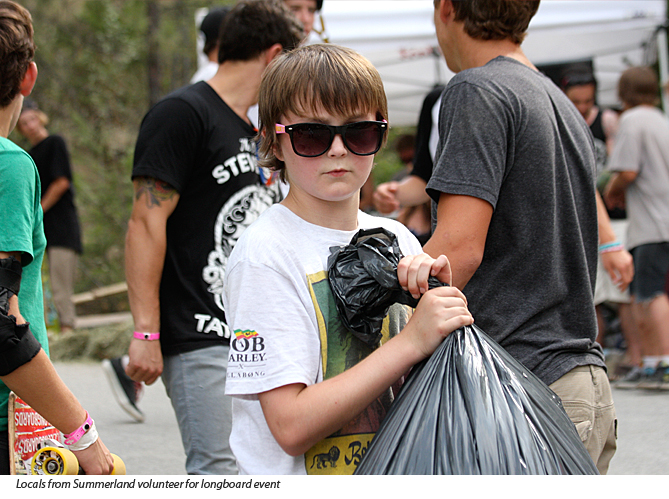 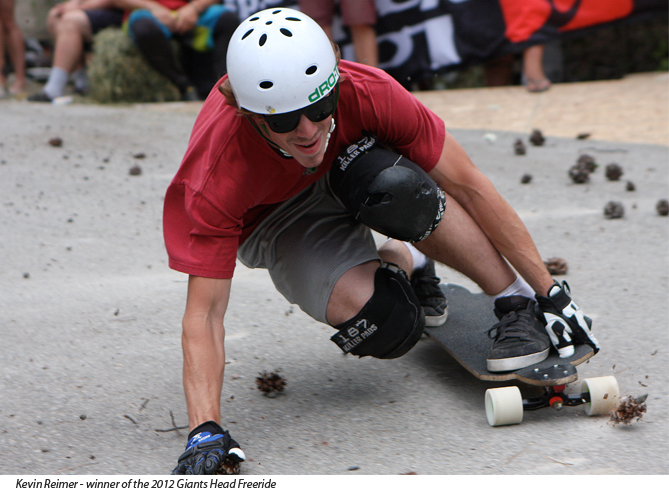 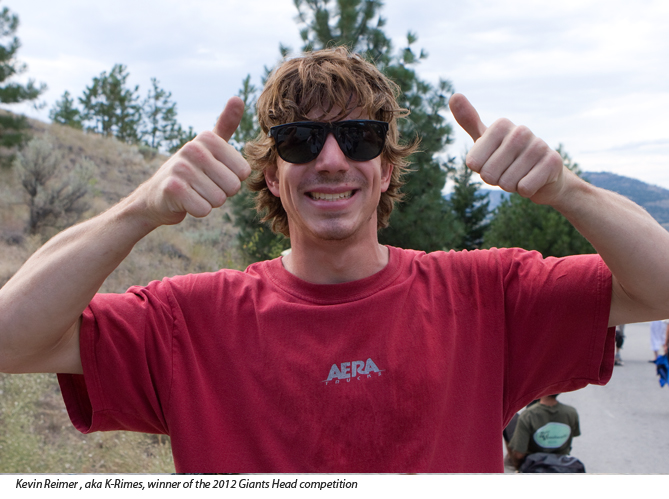 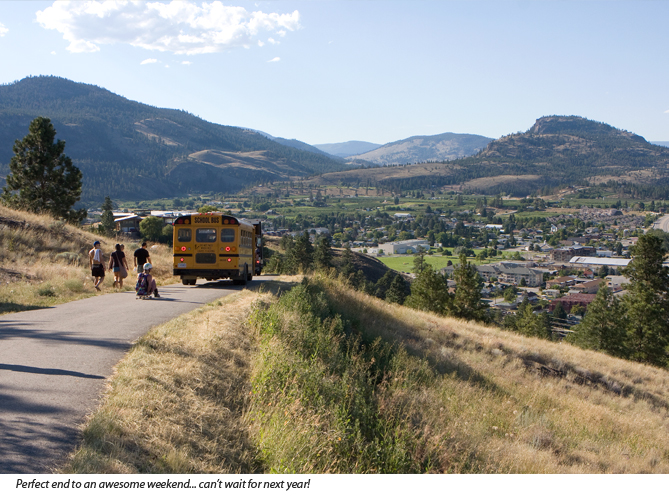 8:00 a.m. Saturday morning, at the Beanery Café on Main Street and the clack-clack sound on the pavement heralds the start of the annual Giant’s Head freeride event.

Each year, since 2008, longboarders head up to Summerland for the August long weekend where according to Wikiskate, the Ride the Giant Freeride “promises to be the most intense weekend of riding with participants having the privilege of riding this very special mountain.”

Giant’s Head is a mountain on the edge of Summerland. It’s an unusual shape and although the origin of why it is called Giant’s Head is hazy, one story suggests it was named after one of two English lords who were empire builders in the 17th century, and were considered to be giants in stature.

Others say it just looks like a persons head and logically since its big, it became known as Giant’s Head.

According to those in the boarding community, the Giant’s Head Freeride event is unlike any other in North America and has caught the attention of the global racing community.

The course is a 2 kilometer paved single track with 13 expert level hairpin turns, and with a 700 vertical foot drop, there’s a lot of speed which is what makes it a great spectator sport. Seeing boarders barreling around a corner at 70 kph makes you want to jump up and down and go “yeah baby!”

The track is fast and difficult or as one blogger put it: “This weekend is gonna be sick. I don’t know if anyone here has rode [sic] this hill before, but its super sick, definatly [sic] the most technical road I’ve ever rode [sic].”

Billed as the “the most progressive downhill skateboarding event in the history of world history” it’s a popular event where registration fills up in less than 24 hours. 200+ riders ranging in ages from about 12 to 45 come from as far as Australia and Hawaii and as close as the Lower Mainland.

The cost for the three days is $185 and includes camping at the Summerland Rodeo Grounds.

The world of longboarding is a colorful, crazy, irreverent world where terms like “ravage” and “shred” are used to describe what riders will do to the course. Judging by the road rash, however, sometimes it’s the other way around, yet while there are a number of spectacular crashes, serious injuries at the Giant’s Head event have been minimal.

Like surfing and skydiving, longboarding requires an unusually high amount of self confidence combined with raw guts. The enthusiasm of the participants in the Giant’s Head Freeride is infectious as they pay homage to the God of speed and thrills and the weekend becomes a testament to living life to the fullest.

Spending three days in the company of these kids is an amazing and intense experience. They’re polite and respectful and look out for each other and their fearlessness is something to aspire to.

Back at the Beanery Café the first mob descends from the Rip City skate bus in search of food and caffeine. Rip City is a longboard/ skateboard shop in Portland and they return to Summerland each year for the Giant’s Head Freeride.

Aline and Piet, owners of the Beanery welcome the boarders to town. “It was the busiest weekend so far this year! If we had known before that it would be so busy we could have sold more… We need events like that every weekend, that would be great!” says Aline.

Land Yachtz Skateboards is the major event sponsor, and there are others such as Rayne, Switchback Longboards and Sector 9. Locally Tim-br Mart and Nesters are also sponsors but the Giant’s Head freeride is not overly commercial. It feels like it’s a well-kept secret that for now anyway is still off the radar, which makes it a privilege as a local to be able to attend.

According to the Wikiskate forum; “The community of Summerland has opened their city to us and embraced this event with their expressed support. We hope to draw upon the excitement surrounding the event and expand awareness to the surrounding Thompson Okanagan region.”

This year there were more boarders and spectators than in 2011 and considering their enthusiasm, 2013′s Giant’s Head Freeride will be even bigger.

Darryl Freeman, a downhill skater from Hawaii wrote that next year “the Hawaiians will be coming back with a bigger crew as this was an unforgettable event!” He added that the wall on the 2nd last corner was a dream, and he wished it was in his living room.

Kevin Reimer, aka K-Rhimes, of West Vancouver won this year’s Giant’s Head event. Kevin’s been skating for a decade and according to an interview on Urban Riot, He likes to go SUPER fast and “blast huge heelside stand ups and hand down toesides.”

In addition to being a two-time world champion and winning numerous trophies, Reimer, who is sponsored by Raynes Longboards, also has an entrepreneurial spirit. He has created his own line of longboard ‘trucks’ – Aera Trucks, which gives a longboarder more control over their longboard. He’s also created his own set of wheels.

According to Kevin, longboarding makes you love life and there’s lots to love about his life where his skills have taken him to Europe, South America, Australia, Brazil and all across the United States where he’s competed against the world’s top longboarders.

On the Urban Riot site Reimer says “I love the connection with the world I get, and the smiles and laughs it brings out for me. Every time I go out and shred my favorite hills … I find myself laughing, smiling, talking to myself as I descend. The feeling of being in total control and sliding and slashing in all those places that you know so well. Consistent enjoyment. There’s really no other form of skating (or any sport I can think of) where you can devour that much pavement and area. We really have no limits!”

One Response to “An awesome shredding”