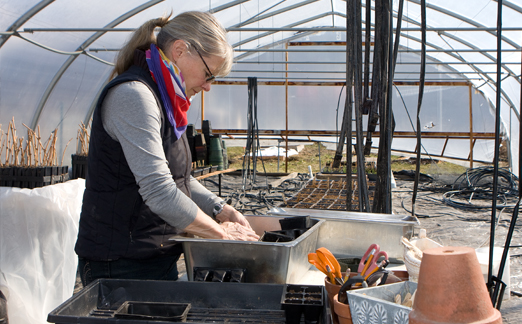 Spring has sprung and with it visions of harvesting tomatoes, kale, basil – Lady Bountiful carrying wicker baskets laden with homegrown vegetables. A few fresh flowers thrown in for good measure.

I am eager to get started. My seeds are ordered and at the ready. I am all for forcing Mother Nature’s hand which often gets me into trouble. I tend to want to start seeding too early. I grow in an unheated poly house which means, at this time of year, it can be hot during the day and sub zero at night. Seeds can be planted in the poly house when the overnight temperature hovers reliably at 3°C. The first week of March found me planting up my seed trays with excitement and expectation. The days proceeded nicely and spring weather seemed at hand. Then…whamo…three weeks into the month and the March Lion roared in bringing a blanket of gray sky, cold temperatures and snow pellets. The over-night temperature in my poly house dipped to -6.5°C. I knew I was pushing the season, however, it is in my nature to be defiant.

I surveyed the damage. Mother Nature backhanded some of my efforts. The hardy seedlings: kale, onions, cabbage, cauliflower and broccoli survived her wrath. The tender seedlings: tomatoes, peppers and eggplant not so much. Although some brave little tomatoes made the cut. I am undeterred. I will reseed. Some years the gamble pays off.

When the snow finally shrank from my vegetable garden, I was greeted with well-defined, surface runways leading to the wide burrow entrances of the voracious vole. I have been growing some perennial vegetable offerings over the years and Spring has previously rewarded me with over-wintered sorrel, parsley, collards, kale, and leeks. This year, winter was mild, albeit snowy, and even the finicky celery survived. Except….except…those pesky voles ate the roots off everything. Oh, the tops looked like they had survived the winter but a slight tug revealed precision nibbling. All early Spring offerings have been decimated. I am prepared to share but those little beggars ate everything. I have never experienced such damaged. Why this year? Apparently, heavy vole damage coincides with heavy snow fall years. Most vole damage occurs in the winter when, with great stealth, they move through their grass runways under the cozy, concealing mantle of the snow. In Prairie Valley, where we farm, the snow fall was definitely heavier than usual.

Voles are also known as meadow mice or incorrectly as field mice. They are compact, heavy set rodents with small eyes, inconspicuous ears and drab greyish brown fur. If your lawn or garden has holes about the size of a broom handle, those are vole holes. They regularly go through cycles of low to high population numbers. Much to my chagrin, voles are active both day and night and year round.

Voles have value in the natural world providing a valuable food source for important predators such as coyotes, weasels, hawks, snakes, barn, great horned, barred and screech owls. Although, I suspect even the most dedicated predator could not keep up with this years’ increased numbers.

Cute, clothes-wearing mice turn up as characters in mouse literature for children. Think of Stuart Little by E.B. White. Stuart is a heroic, helpful and debonair mouse born of human parents. In Tales of Despereaux by Kate DiCamillo, Despereaux Tilling is a misfit mouse who loves music, stories and a Princess named Pea. The Runt Farm series by Amanda Lorenzo, features Cletus who has weak knees for cheese and Tooth a super literate herbalist and creator of T-Rx Cure-All Salve. In mouse literature for children mice stand front and centre – in other words, mice rule. If these erudite mice characters are the habitués of my vegetable garden, I will be more than pleased to accommodate them. However, as they also feed on artichokes, beets, Brussels sprouts, cabbage, carrots, cauliflower, celery, lettuce and tomatoes – in other words, everything in the garden – I don’t know how lenient I can afford to be. In order to preserve some sense of harmony, I propose doing one of two things. One option is to prepare a homemade, organic Hot Pepper Repellant Recipe made of both cayenne and jalapeno peppers. Hot peppers contain capsicum, an irritant to most mammals and thus an effective repellent as it repels pests without harming them. I know I will have to be diligent as pepper spray alone will not work – barriers, clean cultivation, mulch removal, trapping are all part of the program.

My second, preferable, option is to contact Mr. Little. So, Stuart Little, if you reside in my garden – please talk to me. You are described variously as being helpful, agreeable, brave and a good sport. I think you could ascribe those same characteristics to me. I am sure we can work out some sort of mutually beneficial arrangement whereby we share in the bounty of Valentine Farm.