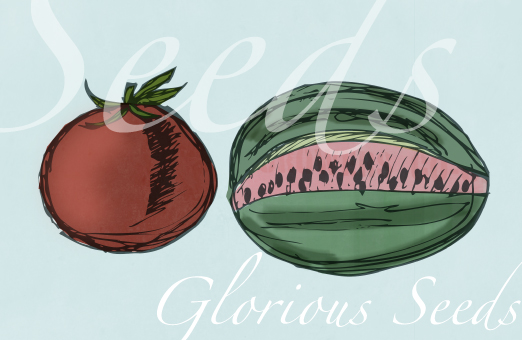 I was not born into vegetable gardening.  My grandparents had a yard but whereas the neighbours were using a lawnmower to cut their lawn, my grandmother was using a scythe to cut hers – if you consider that overgrown, scrubby patch of earth a lawn.  The only living thing she actually planted was gladiolus.  Sad to say, this horticultural heritage was passed on to my mother and, by association, to me.

The time finally came when I had my own scrubby patch of earth to scythe.  I, however,  dreamt of greater things – I saw myself planting carrots, corn, tomatoes and okra.  In chilly weather, I sat on the back porch on a wicker rocker in such a state of dilapidation it was in danger of collapsing under the weight of my vegetable dreams.  I stared out at the space where my garden would grow and sorted through a litany of seed catalogues for my mind to go shopping in.  I carefully read the seed catalogues and the poetry that described the seeds within:

“Barbe di Cappuccino: In southern Italy this wild green with striking jagged lance-like leaves is added to tasty mixed salads called misticanze.  It grows along the coast among rocks where it forms neat star-like annual clumps.  The leaves are slightly bitter and salty at the same time.”

Who could resist the temptation to buy a package of seeds that sounded so…so romantic.  As for okra, I had never seen okra other than in a can.  I wasn’t even sure what I would do with it but who could turn down:

Thus began my love affair with seed catalogues.  My first seed order came in a plain brown wrapper. Inside were the packets of seeds I had carefully ordered by their descriptions.  I chose a package of Crimson Sweet Watermelon to open – “Produces 25lb fruits with juicy flesh that is bright red with old fashioned sweet texture and fine flavour.  The rind is quite thick and lends itself to being its own tureen or punch bowl for soup or summer libation.”

As a novice gardener, I had much to learn.  For example, don’t believe everything you read in the seed catalogues.  Twenty five pound watermelons?  Even though I liked the novelty of using a giant melon for a punch bowl filled to the brim with alcoholic summer libations, I had no business growing a melon that large.  Watermelon take a lot of water, nutrients and space.  The bigger question is, what did I think I would do with more than one 25 pound watermelon?

As for the okra – visions of tender, red okra danced in my head but it turned out to be more than a bit woody.  Originally, imported from Africa, where it is called “gombo”  it might not be your first choice to grow although I met a  grower in Keremeos who had moderate success growing but not selling Okra.  It seems it was a little too exotic.

Have I learned anything?  After twenty odd years (and they have indeed been odd) of growing, it is important to know the climatic zone you grow in, and to grow things suitable for your area. Don’t be lulled into purchasing seeds that won’t deliver as described and, above all, try not to be a perfectionist. These days, when I purchase seeds, I buy from growers with a similar or more extreme climate.  I figure if you can grow Red Fig Tomatoes in Manitoba, they should have no problem growing in our tropical Summerland climes.

article by Kim Stansfield of Vinegar Works and Valentine Farm in Summerland, BC ~ Feb 2013/ graphics by Stephanie Seaton