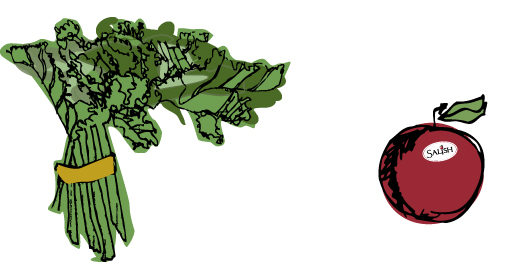 Kale. It is everywhere. I don’t mean it’s growing everywhere but rather it is the current superfood poster child. Like blueberries, goji berries, acai, quinoa, chia, farro, hemp hearts, pomegranates and kangaroo meat (I kid you not) before it, kale is superfood front page news.

Looking at this list of superfoods, one cannot help but notice that most of these foods are not readily grown in the Okanagan, on a balcony or allotment garden. This is what separates kale from the other so called ‘superfoods’. It is easily grown in the Okanagan and it is inexpensive. No excuse for not putting a few seeds in a pot and watching those seeds grow into kales.

In my own Okanagan garden, I really overdid the kale this year. I don’t know what I was thinking when I planted three entire packages of kale seeds. Actually, I do know what I was thinking. I have a large garden and I was trying to fill it. Well, fill it I did with Red Russian, Winterbor and Lacinato kales. After planting all of the kale seed, I noticed the directions stated that in optimum conditions, at least 60 per cent of the seeds will germinate. What are the chances that even 60 percent of the seeds would germinate? Well, apparently, conditions in my garden are optimum because 100 percent of the seeds germinated. That is a powerful amount of kale.

Luckily, The Book of Kale, by Vancouverite Sharon Hanna landed on my doorstep as a gift. The first quarter of the book covers the nutritional aspects (kale is packed with phytonutrients), history and the growing of kale. The rest of the book covers all manner of recipes using kale. I have made several of the 80 recipes and they are easy to follow and well laid out. The ingredients are easy to find and are probably lounging in your kitchen cupboard right now. While the book is not “vegetarian”, Ms. Hanna does identify recipes as gluten-free, vegetarian or vegan. The Book of Kale is packed with information and Ms. Hanna’s writing style is entertaining. She makes kale really interesting. I’d like to see what she could do with celery. Yet another vegetable I over planted – I posit that celery is not quite as useful as kale.

We have enjoyed the following recipe from The Book of Kale a couple of times. The combination of ingredients is delicious. Don’t be tempted to leave out the apple. (Ask for the new Salish apple from Summerland!)

article by Kim Stansfield from The Vinegar Works at Valentine Farm

Recipe excerpted from The Book of Kale by Sharon Hanna.

Stir-fry leeks over medium heat in 2 Tbsp (30mL) olive oil until they soften – about 2 minutes. Add kale and continue to stir fry about 4 more minutes.

Turn up the heat to medium-high. Toss in apple slices and continue to cook, stirring frequently for about 3 minutes until apples are tender but not limp. Add feta, grind in a little pepper and toss lightly. Serve drizzled with remaining oil.

6 Responses to “All Hale Kale”