The morning following last weeks’ Syrah tasting I received a text message from Stephen, one of our non-wine related guests: “Morning … Really enjoyed last evening … the passion behind the wine … great dialogue … got a whole new perspective on my next wine.”

Stephen’s message told me that we had achieved some of the goals behind the blind tastings – one of which was to help unschooled wine drinkers learn to appreciate wine in an environment of interesting and lively discussions.

We have now had three blind tastings, and as Kathy Malone, Hillside winemaker said, we have developed a venue for exploring wines the way a consumer would – tastings are impartial and results non-political. In addition to the bottles being covered, the panel is also unaware of what wines were submitted or the region of the Okanagan from which they came. Often we also throw in a ringer such as the Chilean Monte Alpha Syrah 2009, which makes the results even more interesting. 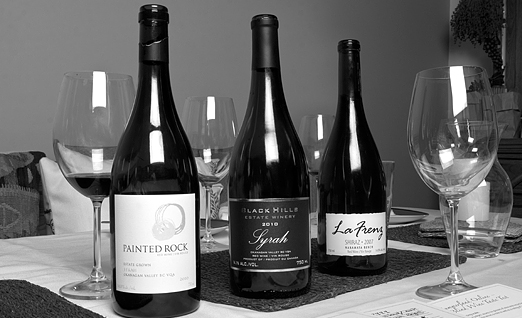 Our guest judge for the Syrahs was Michael Bartier of Okanagan Crush Pad and Bartier Scholefield (BS) Wines. Each judge has their own style and Michael’s cuts to the essence of a wine, describing its characteristics with terms such as “youthfully disjointed still” or “elegant aromas”. A wine newcomer likely wouldn’t notice such subtleties unless it was brought to their attention by someone such as our panel members, who can isolate and describe such nuances.

The judges were in sync with the Syrahs and the top three wines were really close – with each one being only one point apart. The highest points were given to Black Hills (rated as a humdinger), then Painted Rock followed by La Frenz.

Kathy Malone called the Black Hills wine before she knew what it was, saying she thought it was very “south Okanagan” and had a savory sage and green olive scent which opened up to black cherry and mocha notes. She liked it as much as the Painted Rock Syrah noting that they were both excellent yet very different.

Michael Bartier was partial to one of the wines and gave it a four but Ron Watkins docked it a point, as he felt it lacked some characteristics of the Syrah grape, in fact overall the panel felt that some of the wines lacked the Syrah’s varietal character.

Some of the notes picked from each of the judges on the top three wines:

On one of the wines that hadn’t made it into the top three, it was noted that there was a bit of oiliness, but Bartier pointed out that you had to think of the wine in terms of context, and that it may well be good with salmon on a cedar plank which would cut the oiliness of the wine. 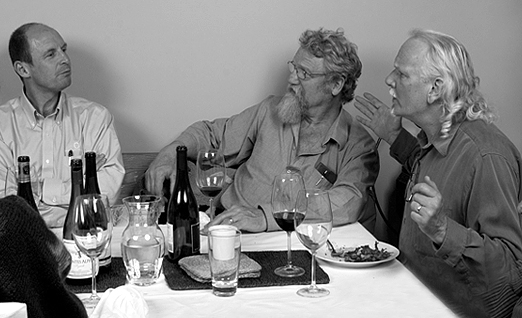 A theme seems to evolve from each tasting and for the Syrahs things got lively around the topic of liquor laws. Ron Watkins (far right) was animatedly describing to Bartier how things need to be changed. Author Don Gayton, (center) also has an interest in the current regulations that prevent wineries from being as competitive as they could be. The conversation had kicked off with a reference to a hot Twitter topic at #bcwinechat – it is peppered with comments such as “Our wine club ships anywhere in Canada. Control boards can eat our shorts.” (Compliments of Bradley Cooper of Black Cloud Winery) and another;”#LCLB should be required to explain the archaic and ridiculous rules and regulations that they create and enforce!”

And if you really want to get your blood pressure up visit the Modernize Wine website outlining some classic examples of government thinking. 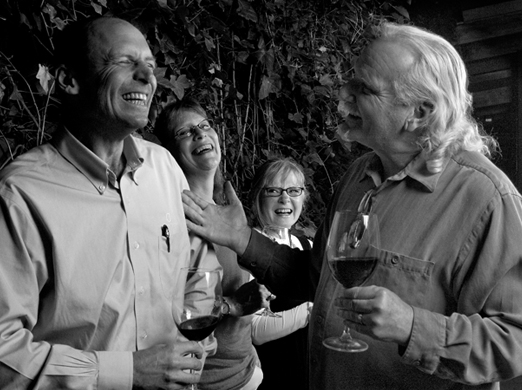 Stephen later said he thought it was fascinating that the judges were so passionate about what they are doing. “This clearly is not just about making something to drink – it’s well beyond that. And Michael Bartier wanting to create a wine that was identifiable and unique to this area – that’s pretty amazing. The intricacies and range of that one Syrah grape, I assumed the wines were all pretty much the same and what was interesting is that they went from regular to turbo-charged and even to high test fuel. The variances – you just don’t know and the result is particular to a certain winemaker and they put their own twist on it… I would never have thought of that. If you are looking for a particular grape and you think that’s the only way it comes, think again. The whole evening was an eye opener as to the variations of and the business of wine.”

Barbara Thorburn for again being our gracious ‘guest server’.

Art Knapp’s Plantland and Flower Shop for the flowers – taken home for a third time by Kathy Malone.

Nesters Market of Summerland for generously sponsoring the dinner for eleven

One Response to “Syrahs – from elegant aromas to big jammy noses”