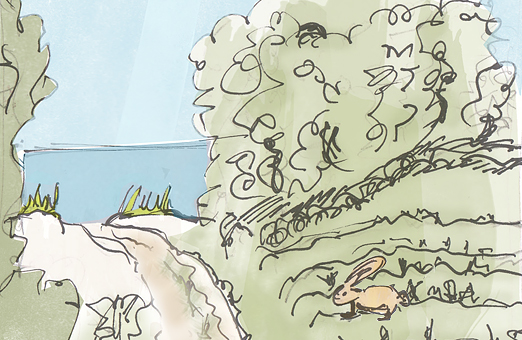 I love summer. The thought that it is approaching rather than just leaving, makes me really happy.  More than anything, except maybe going to Italy, summer is what I look forward to most in any given year.

Memories of summers from my youth are some of my strongest. One of the first I can recollect is walking down a sandy road towards Cavendish Beach on PEI.  I must have been only six at the time, but it has stayed with me always. It was a hot day and there was a beautiful garden shaded by trees and a rabbit hopped around the carrots amongst long columns of dusty sunlight.

Part of the joy of that memory was that I could hear the surf pounding on the beach down the lane – there was an awesomeness and power in that and the promise of a sweepingly wide and unbroken vista of the ocean that for eons had taken people on adventures to far-flung shores.

Another memory from around the same age, is of a visit to Oak Island, where it was said that Captain Kidd’s treasure was buried. I remember peering into a big bottomless pit in the ground, and thinking excitedly that somewhere down in the depths of the water and muck and old planks that smelled centuries old, was the buried treasure of a real life pirate.

Another summer memory was of a stay at a campground on Vancouver Island. The main attraction of that particular holiday, was of the rope and pulley system that was strung up high in the trees, where you would walk onto a landing area and then grab onto the rope and handle and go flying down the line, letting go just as you hit the surface of the water.

When I lived in Vancouver, I was reminded of that experience often because of the lush smells of the rainforest at Lighthouse Park and places like it. The campground had that same wonderful, earthy smell. It is smells that can throw you back instantly to your childhood, always an unexpected an interesting experience when it happens.

There are other memories from being a bit older, more like ten, where in the summer we were told to go out and play and don’t bother coming back until dark. I don’t remember what we got up to but I do remember learning how to whistle in a really loud and piercing way, which has come in handy as an adult. Maybe that’s what childhood is for… learning street skills.

My first summer job ever was exercising polo ponies at the club near where we lived outside of Calgary. At 13 you begin yearning for something; you don’t know what, although you’re pretty sure it has something to do with the opposite sex. And it didn’t help that my boss was pretty good looking and a fearless rider. The little radio that sat on top of the tack room blaring out the songs of the day – a lot by Karen Carpenter it seems, songs about ‘bands of gold’, about being ‘close to you’… wow, powerful stuff at that age with so much promise of things to come.

For me that was summer in Alberta. A dangerous time with hormones raging yet largely managing to keep out of trouble. I strongly remember the scent of one of the polo playing hotties. With his thick buckskin jacket and the adult smell of alcohol on his breath, yet it was all innocent and like most things in life the fantasy was a lot more alluring than the reality.

So now that I’m an adult – it’s mostly songs from that youthful era that catapult me back into those summer memories. Mungo Jerry’s ‘In the Summertime’ from the early 70′s is a big one. Considering it has more than 6 million hits on YouTube, I’m not the only one feeling nostalgic.

Like the movie Enchanted April, where at the beginning in London, everything was dark and depressing, and the main characters were women with unfulfilling relationships who decide to go off to Italy for the month of April. The morning after arriving, they fling open the villa windows and the sun streams in and they are greeted with a view of a spectacular lake and gardens filled with wisteria and flowering fruit trees. Freedom from the drudgery of daily living.

Memories of what are to each of us – big events, can be a bit like watching your favourite movie over and over again, You know how the story goes but to re-experience it is still a pleasure.

This walk down nostalgia lane started with wondering what it would be like for kids coming to the Okanagan for their summer holidays. Would they later cherish their childhood summer experiences as much as I do mine? Will they appreciate that it is as much about innocence as it is about adventure? Hopefully that feeling never gets snuffed out – it’s an important part of what keeps one young and imaginative.

2 Responses to “In the summertime”