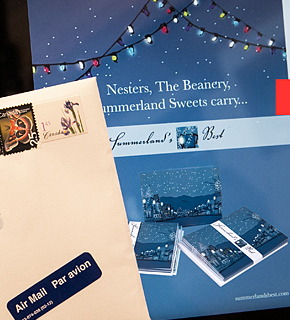 The Eastbourne identity and the meaning of Christmas 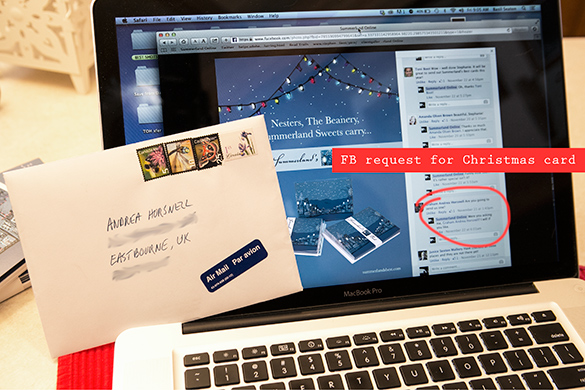 Last week I had a Facebook request from a Graham and Andrea Horsnell to send them a Summerland’s Best Christmas card. I don’t know Graham and Andrea and assume they are friends of a Facebook friend and that’s how they found us. In any event it doesn’t matter and I’m happy to oblige.

I took my addressed card with a personal note and best wishes for a Merry Christmas, to the Beanery so that I could mail it after coffee. My friend Steve and I decided to look up the Horsnell’s address on Google street view. They live in a town called Eastbourne in the south of England. The weather report said it would be cloudy that day and sunny the next.

Apart from the weather, we also determined that they were a short walk from the Sovereign Harbour near Santos Wharf.  Did the Queen visit at some point? Lucky you living so close to the ocean. And is that your black Audi TT V6 in the driveway? Nice.

That is the wonder of technology and there is joy in that. And later when I told my Mum about the card she said, “Oh Eastbourne, that’s down near Seaford” which is a place she spent a good deal of time in her youth.

The meaning behind Christmas cards

Not to get too caught up in the technology… a Christmas card in a micro way encapsulates the meaning of Christmas. It’s personal and your handwriting itself conveys a message and is an expression of who you are, to the recipient. ‘Recipient’; that in itself implies someone is about to receive something. You don’t feel that way about an email. It’s more like a great big boring chore than a means of connection to someone. It’s too easy to bang off an email with the photocopied too-many-times Christmas letter – it de-personalizes the Christmas experience.

Fast forward to having mailed it – Graham and Andrew Horsnell will now be looking for that card in their mail and there will be a level of excitement in receiving it. And for me, I will be looking forward to hearing about them receiving it. Another dimension has been added since this is international – that in itself makes it more exciting. Like when you were young and the phone rang and someone would shout – “It’s a call from overseas.” It doesn’t mean much now with globalization but it sure used to and easily fired the imagination.

One of the nicest things about Christmas in my youth, was the string of so many cards on the walls at my parents’ home. It conveyed the notion that they were well thought of and loved by many. A warm and cosy Christmassy feeling.

Thank you Graham and Andrea

Giving and receiving a Christmas card is an experience wrapped in warmth, depth, and with substance. Thank you Graham and Andrea Horsnell for focusing my thoughts on this. I learned something about a lot of things due to your request. In our electronic age, the giving of a Christmas card is one ritual I’d like to hang on to. Wishing you both a Merry, Merry Christmas  – to my new best friends in the south of England. 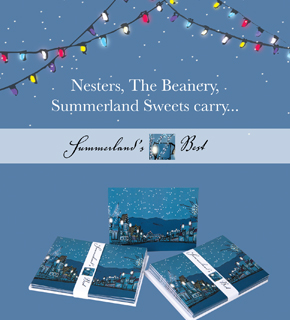 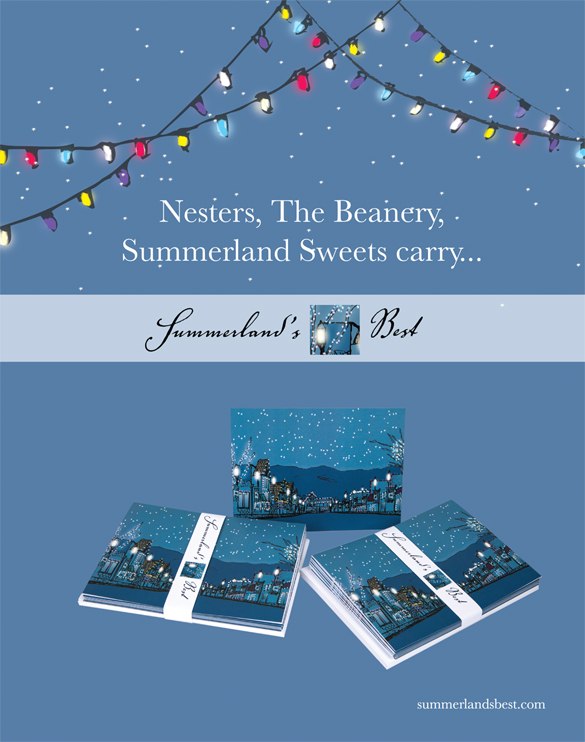 First of the Summerland’s Best products launching November 21, 2013. Look for these Christmas cards in Nesters, at the Beanery and at Summerland Sweets. Updates for further product will be announced!