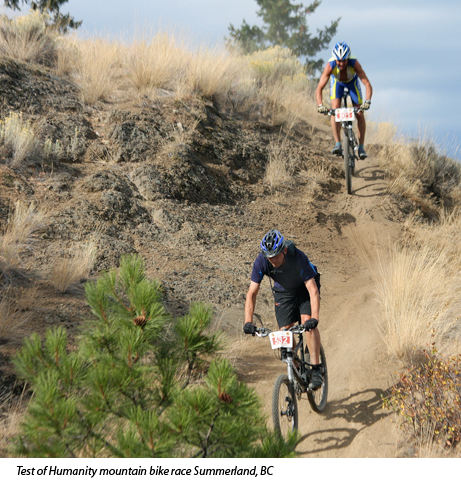 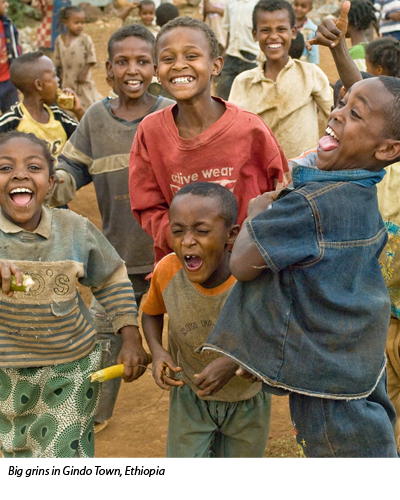 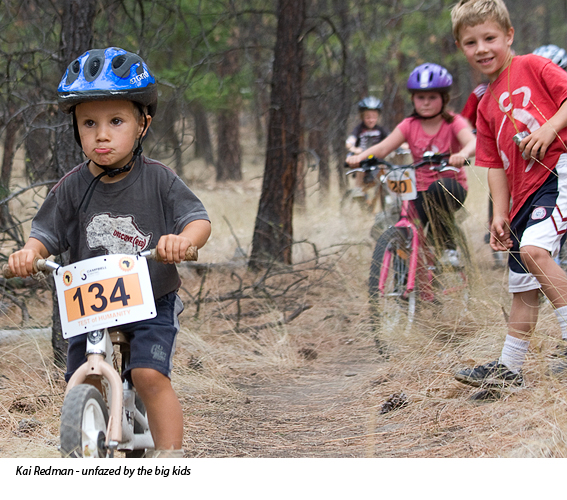 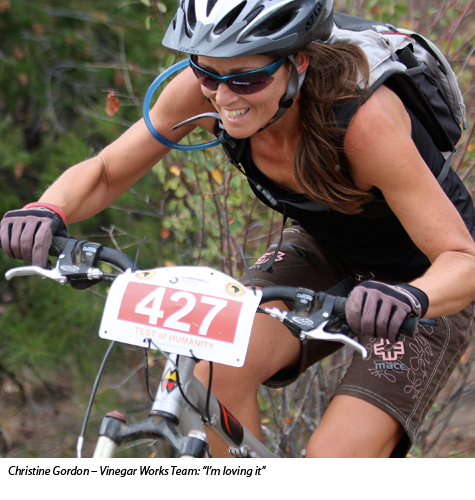 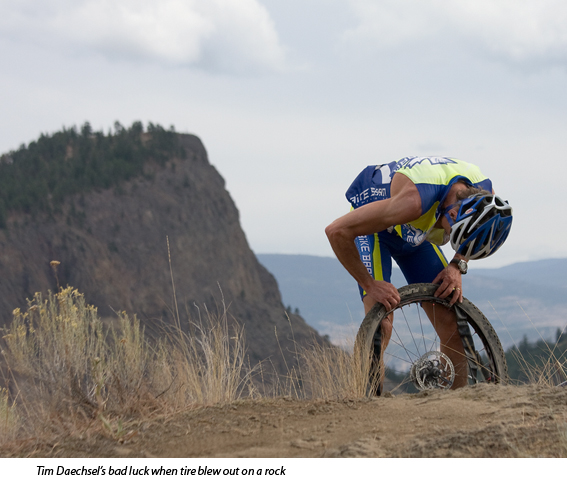 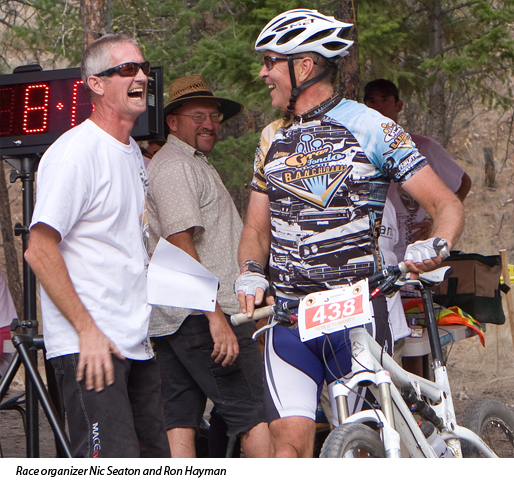 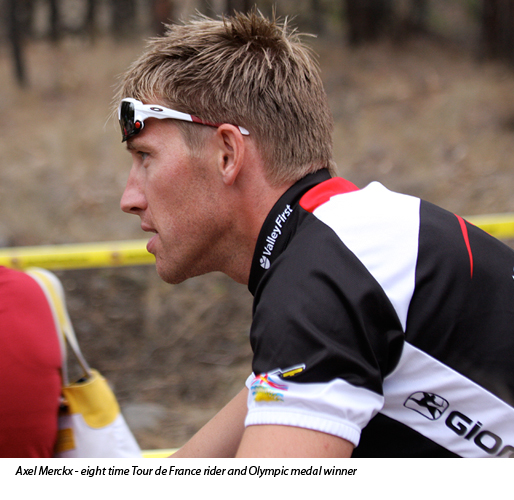 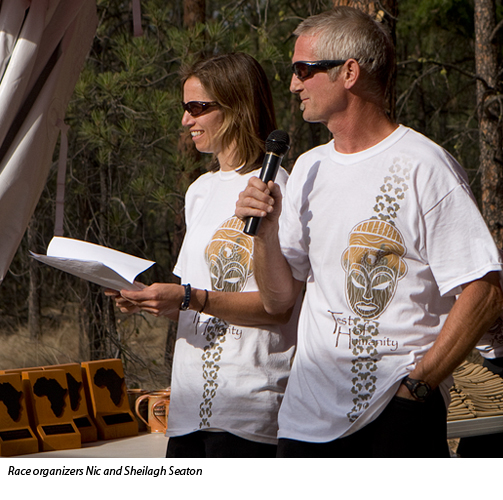 It was a thrilling day on Summerland’s Cartwright Mountain…

September 25 was the big race day for Test of Humanity, an event that was as exciting for spectators as it was for the contestants. The final number of entrants was 198 and pledges and registration fees for the race which was being held to raise money for Canadian Humanitarian came in at over $40,000, well above expectations for a first year event.

A year and a half before the big day on Summerland’s Cartwright Mountain, preparations were already underway for the 2011 Test of Humanity bike race. The 9.75 kilometer course would need hundreds of hours of work put into it before it could be considered a top mountain bike race course.

Planning involved building bermed corners with picks, shovels and a lot of elbow grease. It was a long but fun process that brought people together to work for a common goal. The stakes were high and the payoff would be big if it came together as planned. This would be the first year for the race and there were a lot of unknowns.

Fast forward to the night before race day…. a crew were still out on the course at midnight staking and flagging corners, hoisting banners up trees, loading a thousand pounds of water into Gatorade drums, setting up the tents and ensuring they were anchored to protect against the forecasted 50 km winds… still a lot to be done and organizers were nervous especially considering the potential wind hazard.

The morning was perfect – overcast and cool. It was a circus down at the staging area; trailers, chairs, BBQ’s and tents with cool music playing from quality speakers… kids beetling about, and dogs and adults socializing.

Steve King local legend and announcer for Ironman Canada was the emcee setting the tempo for the day by announcing background and race stats on every single rider with his usual dedicated thoroughness.

But the Kids race was the charmer. The youngest contestant, a boy named Kai, who was all of three years old on a run-bike was captivating as the newness of the experience was for him, a bit of an emotional roller coaster ride. His enthusiasm and perseverance even when things weren’t going his way, charmed spectators.

When the races were over, the kids by that time being dusty and exhausted, scattered into different venues for scavenger hunts, craft making and an obstacle course. Tired but happy, there were big smiles all round.

The excitement in the air was tangible at the staging area as the racers, some of whom were riding as individuals and others riding as teams with names like ‘Will Ride for Beer’, ‘Wheel Old Chicks’ and ‘Year of the Dog’, made their way to the starting line for the gruelling four hour mountain bike race. Semi pro’s and top riders and just plain mad keen riders; all of them were excited to be competing while knowing it would be a taxing course considering the location names like V02 Max, Quadrafeelya and the Garnet Grind.

As the race got underway spectators dotted the course at various climbs with names like ‘Cardiac Arrest’, ‘Rattle and Hum’, or ‘Sudden Impact’, waiting to cheer on family or friends and really anyone that stayed the course.

Four hours later after duking it out, flat tires, broken chains, a broken bike seat, sweat pouring off tired brows and lactic acid coursing through veins, the Test of Humanity proved itself to be a humbling but exhilarating experience.  No one was disappointed and the spectators even had a chance to cheer on their favourite celebrities – (no not Brad and Angelina) Belgian pro road racer Axel Merckx and his lovely wife Jodi who were riding up a storm in the mixed team event.

Some of the riders rode each 9.75 k loop in 30+ minutes, others took longer; no matter – each contestant was a winner competing mostly with themselves. One rider, later called it a ‘Sufferfest’ but his whoops of exuberation heard coming down ‘Compression Col’ gave him away…. he was having a blast and as he said “the race course was so smooth, clean, banked and flowy, it was amazing.” He added that he was proud to ride.

It was an amazing day and riders and spectators alike had big grins from ear to ear. It had been a thrill for kids and adults, pros and non-pros as well as spectators. This was a race that already has everyone talking about the next one but sign up early because the next race is sure to have a registration cutoff!

Pledges for the Test of Humanity came in at over $30,000. 100% of the race proceeds in the form of entry fees and pledges will go to Canadian Humanitarian to aid them in their work with disadvantaged children in Ethiopia.

Race organizers Nic Seaton and Sheilagh Seaton had visited Ethiopia twice in the past two years through the Okanagan College and had worked with all seven of Canadian Humanitarian’s projects. For them, it has been an education on living with difficult circumstances as the majority of the children within the projects are either orphans or considered vulnerable and at risk.

Nic and Sheilagh came up with the idea after their first trip in 2009 to help Canadian Humanitarian by organizing a mountain bike race that would raise money for the organization’s Ethiopian projects. Race proceeds will go towards providing the children in the villages with an education, health care, school books, uniforms, school meals and also by providing guardians for each of the children.

For information about the Test of Humanity race and Canadian Humanitarian’s projects go to www.testofhumanity.com