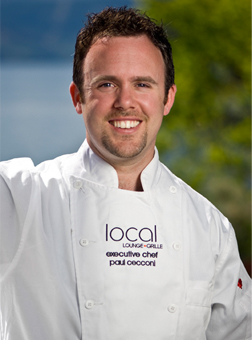 Competing against twelve of BC’s top chefs, Cecconi’s ‘outlandish’ oyster chowder with parsnips and squash was topped with crusty buttered bread crumbs, and was in the words of the judges; “the well-deserved winner”.

Cecconi says of his win; “I’m incredibly honoured to have won this year’s Ocean Wise Chowder Chowdown. It’s fun and inspiring to have these friendly culinary competitions with chefs I’ve known for years, particularly when they support a good cause,” said Chef Paul Cecconi, Local Lounge • Grille.  “I began practicing an ocean-friendly seafood philosophy as a chef at the Four Seasons Hotels in Vancouver and Sydney over a decade ago and at Local we’ve been an enthusiastic Ocean Wise partner since opening in 2009. Living and working by the lake really brings home the value of this.”

The sold-out event of 550+ guests was held at the Vancouver Aquarium on November 23. Finalists had been narrowed down from a field of 40+ chefs from restaurants and culinary institutes throughout the province ranging from the Four Seasons to the Pacific Institute of Culinary Arts. In other words; stiff competition.

‘Local’ in more ways than one

As the head chef at Local Lounge • Grille, Paul takes a hands-on approach with everything from produce selection and planning menus, to ensuring that the focus for dishes is both seasonally appropriate as well as sourced locally. Face to face meetings with local suppliers means he knows what’s coming into the kitchen and he personally gets involved in all aspects, from seed selection through to harvest.

Paul is committed to excellence in gastronomy and wine, and has an advanced Wine & Spirit Education Trust (WSET) certificate. One of his contributions to the culinary industry is to mentor other young chefs in their culinary journey to achieve Red Seal certification, which allows them to practice their trade anywhere in Canada without additional examinations, thus helping them gain an advantage in what is now a competitive industry.

Award winning chowder soon to be on the menu

Christa-Lee McWatters Bond, co-founder of Local Lounge • Grill is proud of Chef Cecconi’s Chowder Chowdown win. “We’re thrilled that Paul has been honoured with another culinary award. His innovative use of parsnip puree rather than pure cream for the Smoked Oyster Chowder base and an ‘oyster bacon’ garnish of smoked oysters in brioche breadcrumbs, gave his chowder a unique creamy, earthy flavour, which I think made it really stand out from the rest. We’re adding this delicious dish to our winter menu and I look forward to the customer feedback!”

You may only have to wait a week or so for this new menu addition, but if you’re up to the challenge you can try it out in your own kitchen. Check out the recipe below.

• sauté bacon in soup pot till almost crispy then add onions, carrot, celery, leek, garlic and smoked paprika and sweat for 5 minutes
• add potato, parsnips and squash and cook a further 5 minutes
• add flour and cook out 5 minutes then add wine, stock and cream and let simmer for 15 minutes
• add in fresh thyme, bay leaves and outlandish oysters and simmer a further 25 minutes
• season to taste

For the brown butter breadcrumbs: